It was the hottest day of the year and the hottest in UK history, but 19 members braved the heat and sat in front of their computers to see what woodturning delights would be on offer. As usual Chris and Zak were in their respective workshops ready to entertain us. 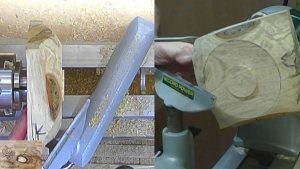 Zak started off with a blank that he described as odd in that it looked to be square but wasn’t and had little bits missing which would have to be worked around or incorporated into the design. The finished item would be a square sided bowl but with some quirks. The result, according to Zak, could be something, odd!

With the wood mounted on a screw chuck Zak set about shaping the bottom of the bowl. What soon became apparent was that despite any oddities the wood was very nicely spalted and looked good. On one side it would also have a natural edge. Having shaped the outside the piece was reversed and mounted on a spigot so that the hollowing could commence. The depth of the square section was reduced so that the lip of the 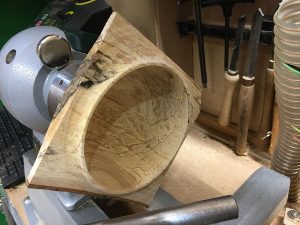 bowl would stand proud to its surroundings. One of the corners came away and because of the overall shape of the piece the circular bowl was not quite centred, but the finished article was very pleasing and the oddness made this bowl a very acceptable piece of turning. It proved the point that not everything has to be perfect in shape and form and that the flaws nature has put into the wood can be turned to advantage at the hands of a skilled turner.

After the break, Zak took a second piece of wood, again not quite perfect and set about making a goblet. He shaped the outside and then drilled a hole to the depth required for the hollowing process. To do the hollowing Zak used carbide tools which made easy work of the job and gave a good finish that didn’t require a huge amount of sanding. On one side of the wood there was a piece of bark which meant that at that point the wall was very thin but that was the quirkiness of this piece which maintained Zak’s odd theme for the night. The hollowing finished, Zak then set about refining the shape of the stem and was about to use a jam chuck arrangement in his tailstock to give support until a member suggested using a tennis ball. Without hesitation Zak produced a tennis ball (he didn’t enlighten us as to whether or not he also had a racquet lying around) and held that in place with his tailstock; a very quick and easy way of supporting the work. The base was completed in the style of a winner’s trophy i.e. it had enough depth to take an inscription, Zak Was Here, was suggested! 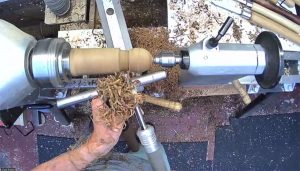 For his part Chris had decided to try something new and make a spoon, the most complex part of this project being the hollowing out of the bowl.
Chris mounted a 6 x 1 inch and 3/4 piece of walnut on the lathe and supported it with the tailstock but he stressed the importance of not using a pointed support in the tailstock as this would mark the sphere that would be turned to form the bowl. He then formed that sphere, removed the tailstock and cleaned up the end. A beading tool was then used to form three beads at what would be the bottom of the handle where it joined the bowl. The beads and sphere were then sanded before the handle itself was created. More beads were created at the end of the handle which were the same dimensions as those at the bowl end. Chris then used a beading and parting tool to refine the shape of the handle before shaping its end and parting the piece off. Now came the interesting part, hollowing out the bowl. Chris mounted a jam chuck onto the lathe which had the correct diameter, (plus a little bit for gluing), to take the sphere. There was also a cut out on the chuck that allowed for the handle. A bead of hot melt glue was run around the sphere where it sat in the jam chuck and once dry 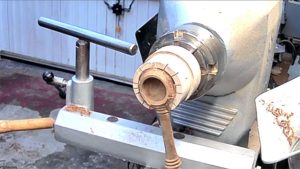 the glue securely held the spoon in place, ready for hollowing. With the lathe running it is essential to remember that the handle of the spoon is rotating at great speed and is essentially invisible, so hands must not be allowed to wander over or round the tool rest into its path. Once hollowed Chris used sanding paper attached to a small brush handle to carefully sand the inside of the bowl. With the sanding and finishing complete a bradawl was used to remove the glue from around the bowl and ease the spoon out of the chuck. As usual, a complex job made to look relatively easy!
After the break Chris, in keeping with summertime TV schedules, went into repeat mode and hollowed out a second spoon but, to be fair, he only did this because he was asked to do so.

This month the Show and Tell section gave us an interesting look at what six of our members had been up in the last month and we were also shown an excellent vide, made by Dai, of him turning a bowl and putting a decorative stripe on it using Jo Sonja paints. Well worth a look on the website. 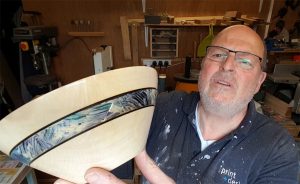 So there we have it, an evening of extremely odd temperatures, odd items turned by Zak and Chris trying something new. We must extend our thanks to Chris and Zak for putting up with extreme temperatures in their workshops in order to keep us entertained. Hopefully things will be a little cooler next month and perhaps not so odd!

Thanks Alan for another great write up capturing the nights activities.

Check out the rest of the screenshots in the Gallery

This coming Sat 23 July we have the Training Day which is now fully booked.  We also plan to open the Club shop between 10am to Midday, so if you need anything pop across and see what we have for sale.  We now accept Card payments making it easier now to pay.  There will be no access to the Main Hall whilst the Training sessions are in progress.

As you may have seen, we have now built a lean to in front of the Container which the wood work now requires painting.  So if you can spare a few hours and are able to help paint, please come along from 8am onwards.  If you have any brushes, steps and PPE please bring them along.

Next Demo is Rick Dobney on the 26th July so expect the meeting link in an email in the next few days.

Lesson in using a Skew Chisel – On the next Hands on Night as well as having the two beginner lathes set up, we are offering you the opportunity to book a one hour session (2 available) with the Skew Master, Mr John Liles to learn how to use the Skew for turning and not opening tins of polish!  If you are interested in booking one of the slots, please get in contact with Martin.  This will be on first come, first served basis, but if it works we intend to repeat it. 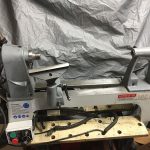 For Sale – Axminster LatheSales and wants 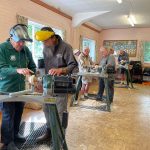