Welcome to our Workshop Night

It may have been the summer solstice but fortunately 24 of our members forsook a trip to Stonehenge (or maybe just ensured they returned in time) in order to attend the June workshop evening. Chris and Zak were in control, well we let them think they are, so it was off to their respective workshops.

Chris had opted to start the evening by turning fruit and at the same time showing the different methods of holding the wood in the lathe and the importance of forming a perfect tenon. 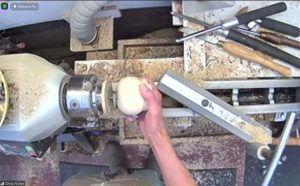 With the wood held between centres Chris formed a tenon emphasising that the tenon must form an accurate angle of 90 degrees to the surface of the piece and must be just long enough to sit in the jaws allowing then to hold the wood securely, but not so long that it rides on the bottom of the jaws. With the blank mounted in the jaws he then set about creating the shape of an apple and then drilled a 3mm hole in the end that would serve as the mounting point for a screw chuck and eventually the stalk of the apple. The screw chuck had a 4mm screw that fitted into the 3mm hole. Once shaped a hole was drilled in the bottom to take a clove. Out of the chuck a hole was drilled in the top of the apple, at an angle, to accommodate the stalk. Chris explained how he prepares stalks from small pieces of wood and always cuts the top at an angle so that it looks like the apple has been pulled from the tree. 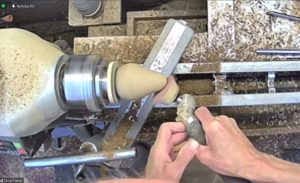 reversed back into the screw chuck to complete the job. Chris emphasised that the size and shaping of fruit was entirely up to the turner, there being no specification in nature for how an apple or pear should look, so at the end of the day if the finished article looked acceptable to the turner then who could say it was right or wrong.

After the break Chris demonstrated his techniques for sharpening a skill, which we all know, often causes more problems than the turning itself. Chris prefers to use a grinder fitted with CBN wheels and a jig system for gouges similar to the One Way system. He showed the correct methods for putting the tools into the jig, how to achieve the correct angles and then the actual technique for sharpening. We were also shown the way to sharpen scrapers and parting tools together with a comparison of CBN wheels with the more traditional stone wheels. This was an interactive demonstration with many questions asked and answered and an interesting debate about sharpening. 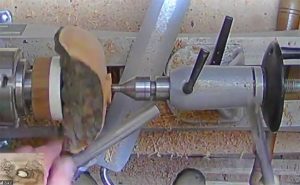 Zak this month had invested in a piece of pink hawthorn, thirty pence from the club shop, so with that level of investment Zak was anxious to make something special. Using a screw chuck the log was mounted at ninety degrees to the lathe bed so that a natural edge “bowl” could be turned. A tenon was formed and the outside of the bowl shaped, much care being needed so as to avoid catching either the tool or fingers on the spinning edges of the wood. As with all such pieces there was a lot of thin air being “cut” hence the need for caution. Once the outside had been shaped the wood was reversed and held by the tenon so that the hollowing out could commence, again a task that required both skill and caution. Having spotted a knot in the wood Zak removed it and filled the hole with a mixture of super glue and brass filings which would from an interesting feature. A layer of superglue was also run around the edge of the bark in order to secure it. Having completed the hollowing to his satisfaction, not to mention the audience, Zak turned his attention to his scrap pile and found what looked like an oversized egg cup which was the ideal piece from which to turn a foot for the bowl. Once the shape and fit were perfected Zak finished the foot with ebonising lacquer which gave an excellent contrast to the finish of the bowl itself. As usual Zak was encouraged and guided (and at times probably hindered) by the comments and feedback from the onlookers.

The Show and Tell section this month was well supported with photos of diverse and interesting pieces submitted from ten members. We were also shown an informative video from John Mitchell who showed us how relatively easy it is to strip down and service a chuck.

All in all another good evening where we not only saw the fruits of Chris’s labours but discovered that Zak’s bark was certainly nothing to be afraid of.

Another great write up by Alan Selden to capture the evening in its fully glory. Thanks Alan.

To see all the screen shots from the evening, please have a look in the Gallery HERE.

Firstly, you will be pleased to hear, we have a willing volunteer that has come forward to take on the Club Secretary role, so a big THANK YOU to Graham Miles and welcome to the Committee.

Training Day – 23 Jul 2022 – Please go and look at the Training Day page HERE and let’s get the remaining 6 slots booked up as soon as possible, which for an hour one to one training for £10 is a bargain.  We have two, 2 hour slots and two, 1 hour slots available at the time of posting this.

Next online Demo – 28 Jun 2022 – Phil Rose from the USA.  If you are on PAYG membership, don’t forget you need to go and purchase your ticket HERE if you want to watch this online demo.

Tools and Equipment Sale – 2 Jul 2022, 10am to 12 midday – We will be opening up the Hall to display and sell loads of tools and equipment on Alan Buckles behalf.  All sales will be Cash/Chq only.  Alan has also very kindly donated to the Club, a sphere making jig, a load of pen making equipment, bushes, blanks, pen kits, plus finishing products that all will be available to use on our Hands on Nights. So please show your support by coming along and let’s make some money for Alan.  A dedicated news post detailing what items are available will be posted after this one has been published. The shop will also be open to stock up and after spending all your cash, you can then use card in the shop!

Next Hands on Night is on 12 July, so we hope to see another busy night if June’s meeting was anything to go by. 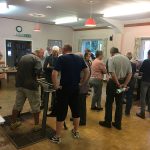 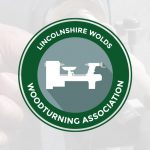 Tools and Equipment For SaleSales and wants