Sorry for the delay in posting this of which Zak kindly provided, it’s been one of those weeks!  Better late than never.

Gary joined us all the way from the Moray are in the north of Scotland, although Gary has visited the club for an all-day session in 2017 it was a treat to see him online again. Following our usual greeting and notices our chairperson introduced Gary who originally from the Glasgow area but now in the north of Scotland, with a previous career as a mechanical engineer, described the item he would demonstrate for us: an off-centre Saturn style bowl, plus a choice at the end if time permitted.

A 7 x 4 piece of prepared Wych Elm was centre mounted on a worm screw with a second hole drilled 10mm off-centre to create the final shape. As usual the blank was trued to round and flat, and the area marked to determine dimensions of the bowl and the ring/rim. Timber was quickly removed with pull cuts; it was obvious from the shavings that Gary’s gouges were extremely sharp, and it was made clear throughout the demonstration that if attempting off-centre work to only work within your own capabilities and confidence level.

The base was started to form the round shape and a tenon mounting point created so that piece could be reversed when hollowing the bowl. Gary explained that the round shape, both top and bottom needed to be the same size both from the aesthetic point of view and the use of a ‘ram chuck’ to hold the work. Gary was aiming for a ¼ inch ring/rim for wing of the piece and worked towards the shape before hollowing out the centre to a uniform thickness. Care was taken when turning throughout, as this was off-centre, one half of the wing was larger that the other. The ram chuck then came into play both to finish the bottom to a small point; so that the bowl would rest to one side to show the effect of the ring and then reversed to reduce one edge of the rim of the bowl to further enhance the whole illusion. Electrical tape was used to secure the bowl into the ram chuck as it was explained not much pressure was needed to finish the item. Gary decided that as it was a very dry piece of timber and that he could not use a full-face mask whilst demonstrating he would not sand the bowl but explained how he might finish either with colour and texture on a plain piece of timber or just oil if it was highly figured as this was.

Then a five-minute break, and that’s all it takes for a cup of cold coffee and a piece of cake. (Add your own tune). We then had a choice of a small project to round off the evening and we chose a shield, a round one, in the Scottish style. A 1½ X 10-inch Ash blank mounted on a piece of sacrificial timber with hot melt glue was mounted on a tenon in the chuck. The blank then trued up and a recessed dovetail chucking point added before reversing to turn away the holding glue. The face was then turned down to the required thickness with rounded edges and a beaded rim, a boss to the centre with a small well-defined bead around the middle. Gary, very aware that not all amateur turners have deep pockets showed his home-made platform and holding carriage for his small rotary tool, which he explained he would use to carve into the face of the shield using a pointed burr and the indexing feature on his lathe. The face was then quartered and textured with a handheld texturing tool before explaining colouring techniques and the endless choices you could imagine to decorate.

Time was against us but Gary had prepared a sample for us to see the possibilities of what you could achieve with items that many of us have in our workshops.

You can see from the pictures how this could turn out. Only a few questions at the end as Gary had explained each stage along the way and emphasised the need to work safely and within your own comfort area. A big thank you to Gary for the evening from us all at LWWA. 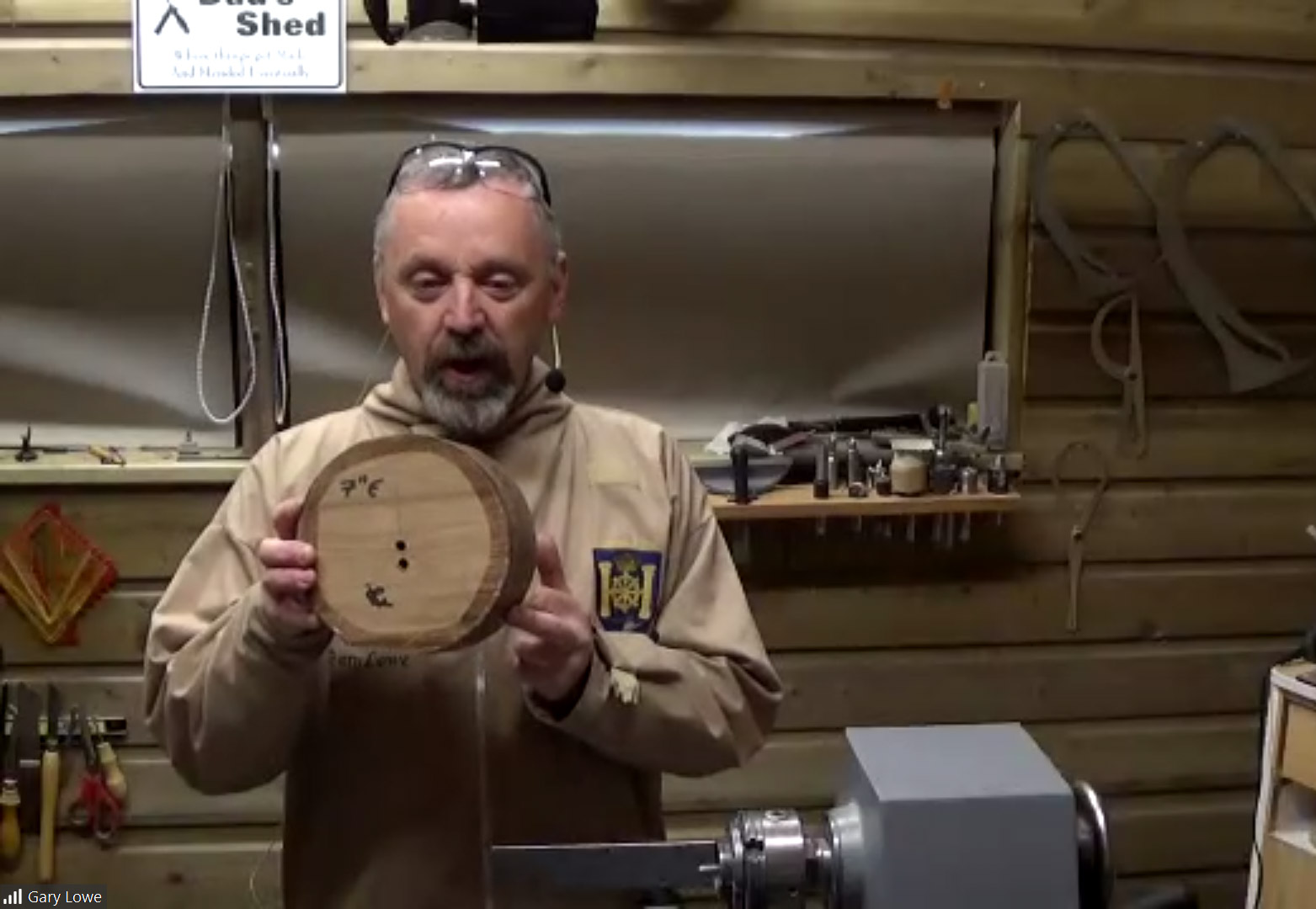 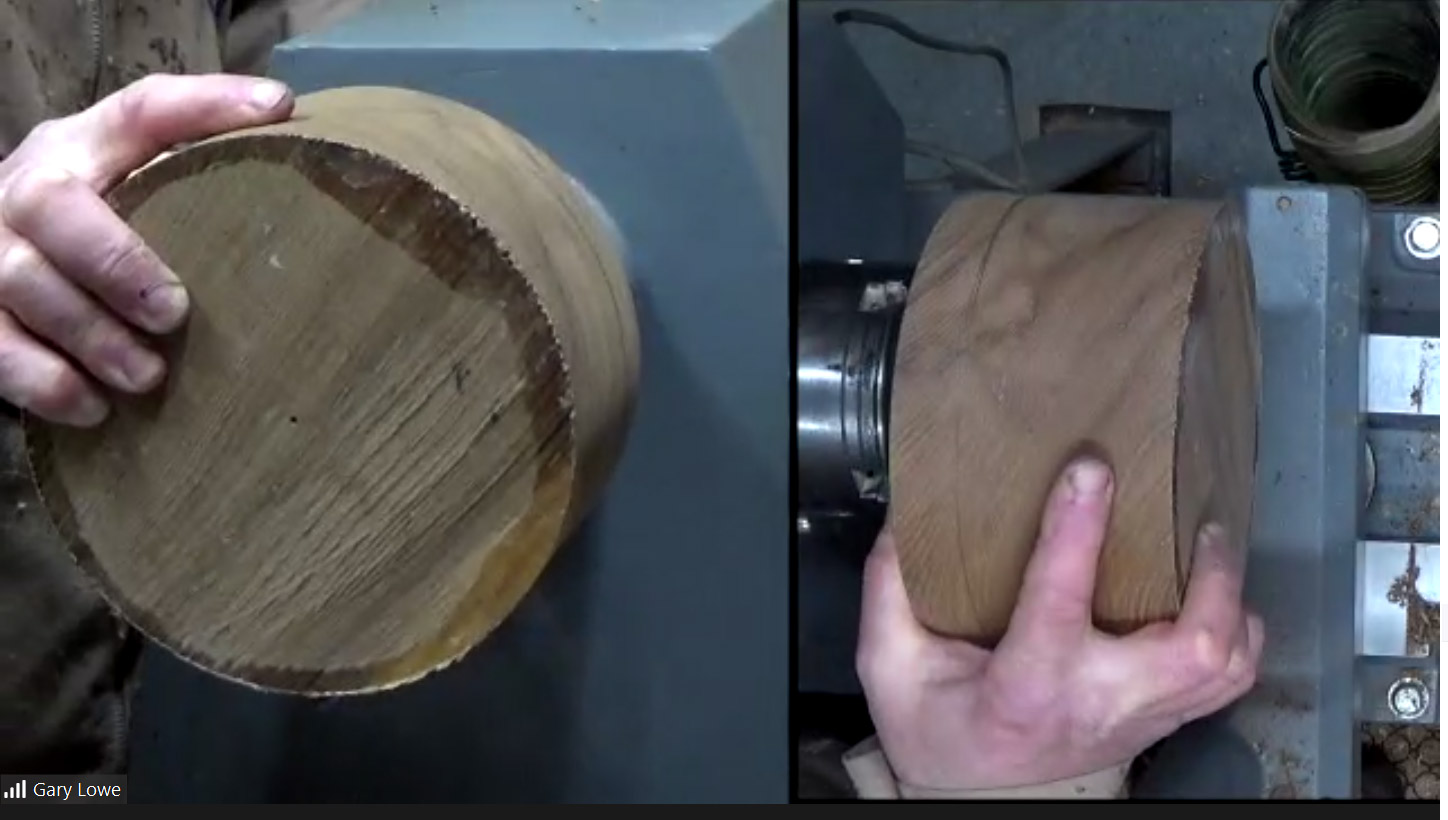 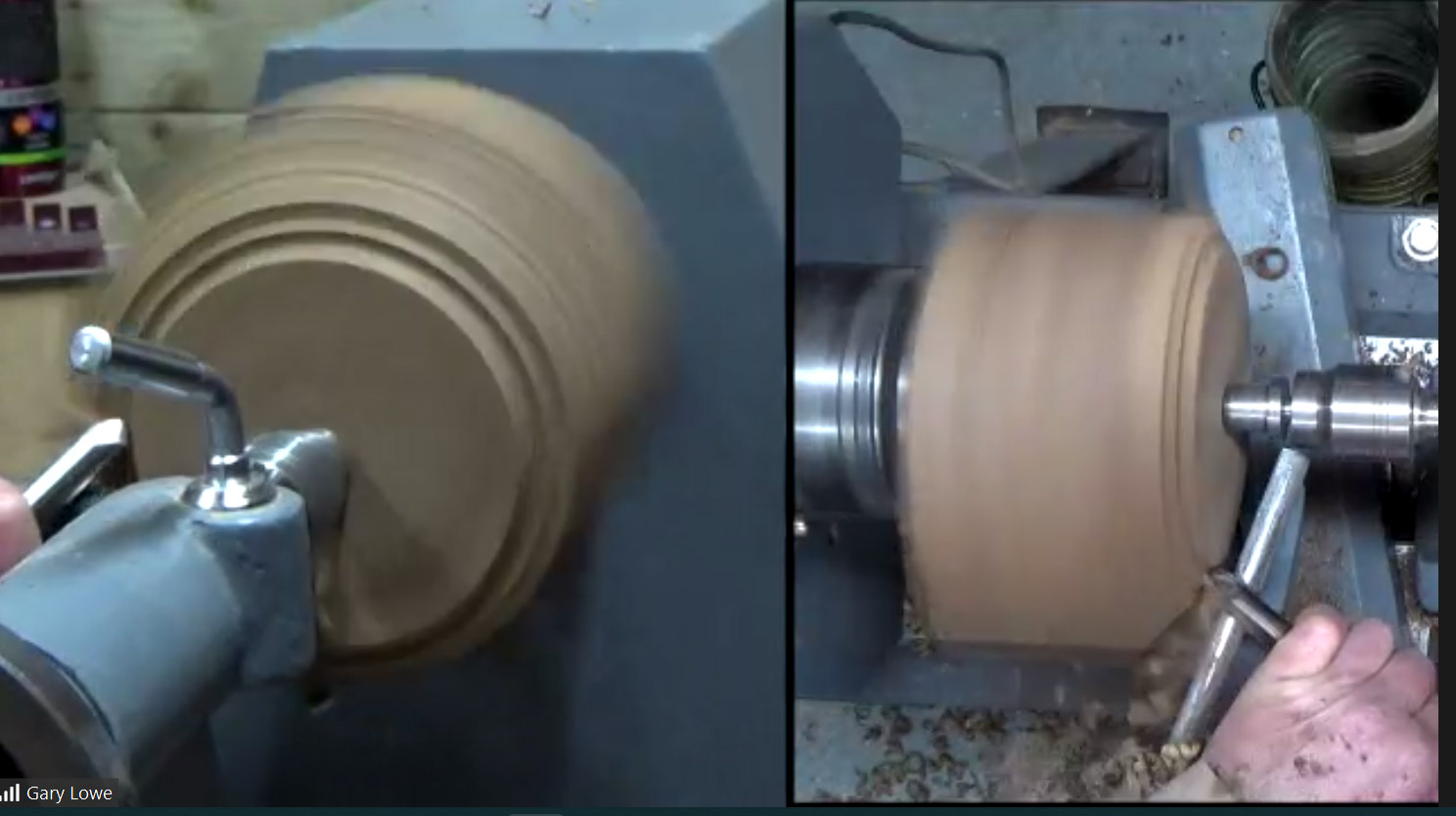 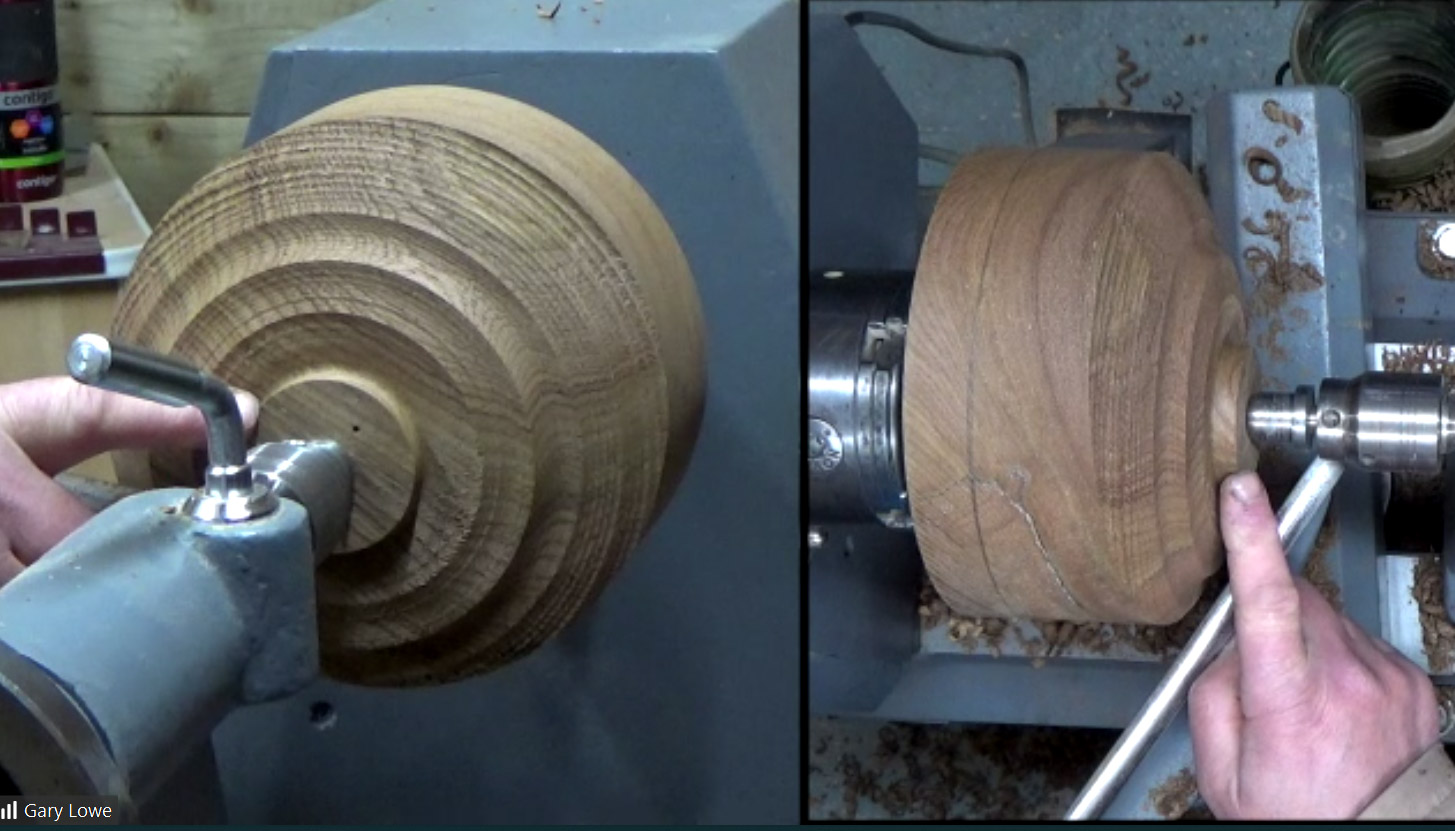 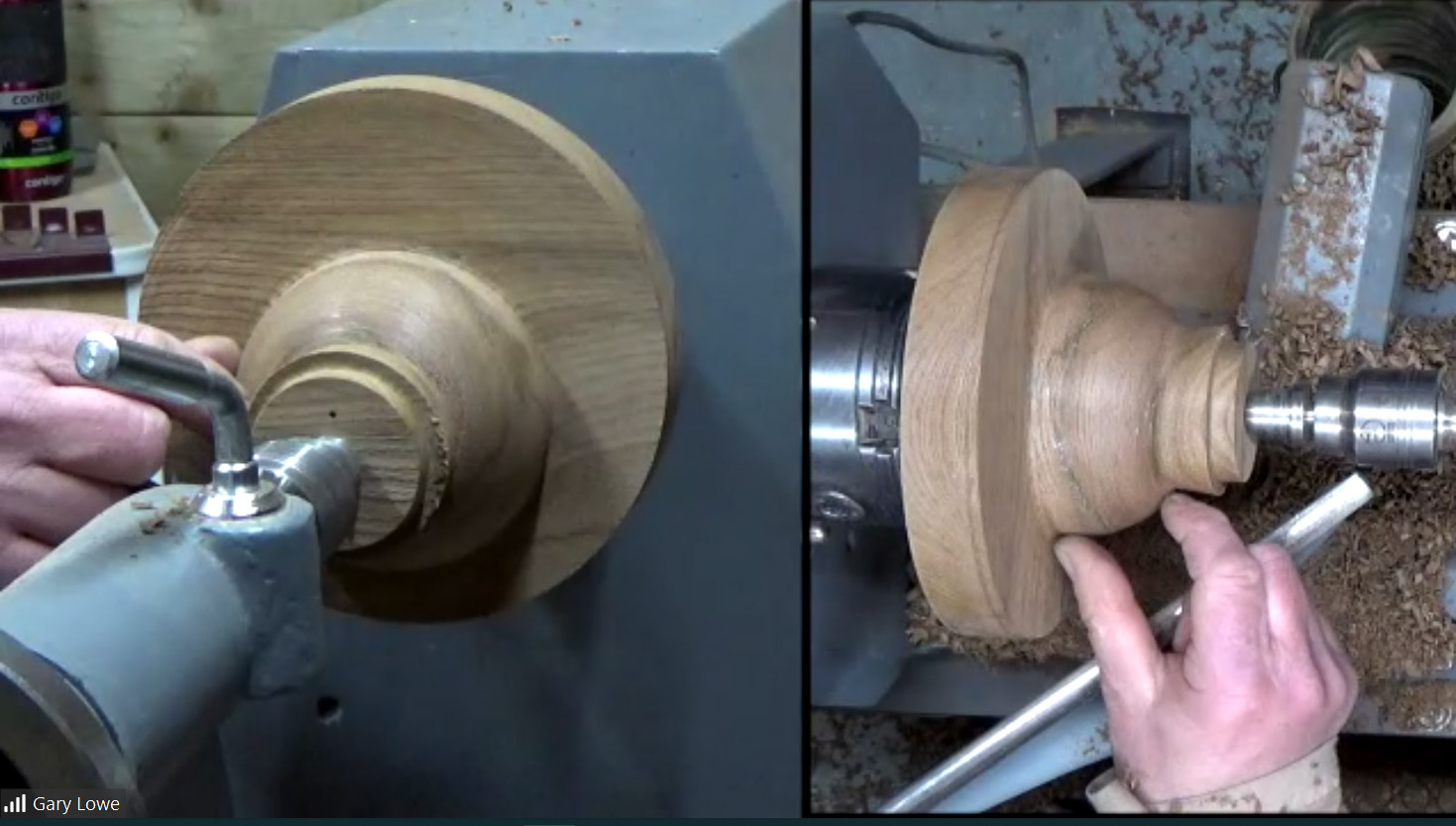 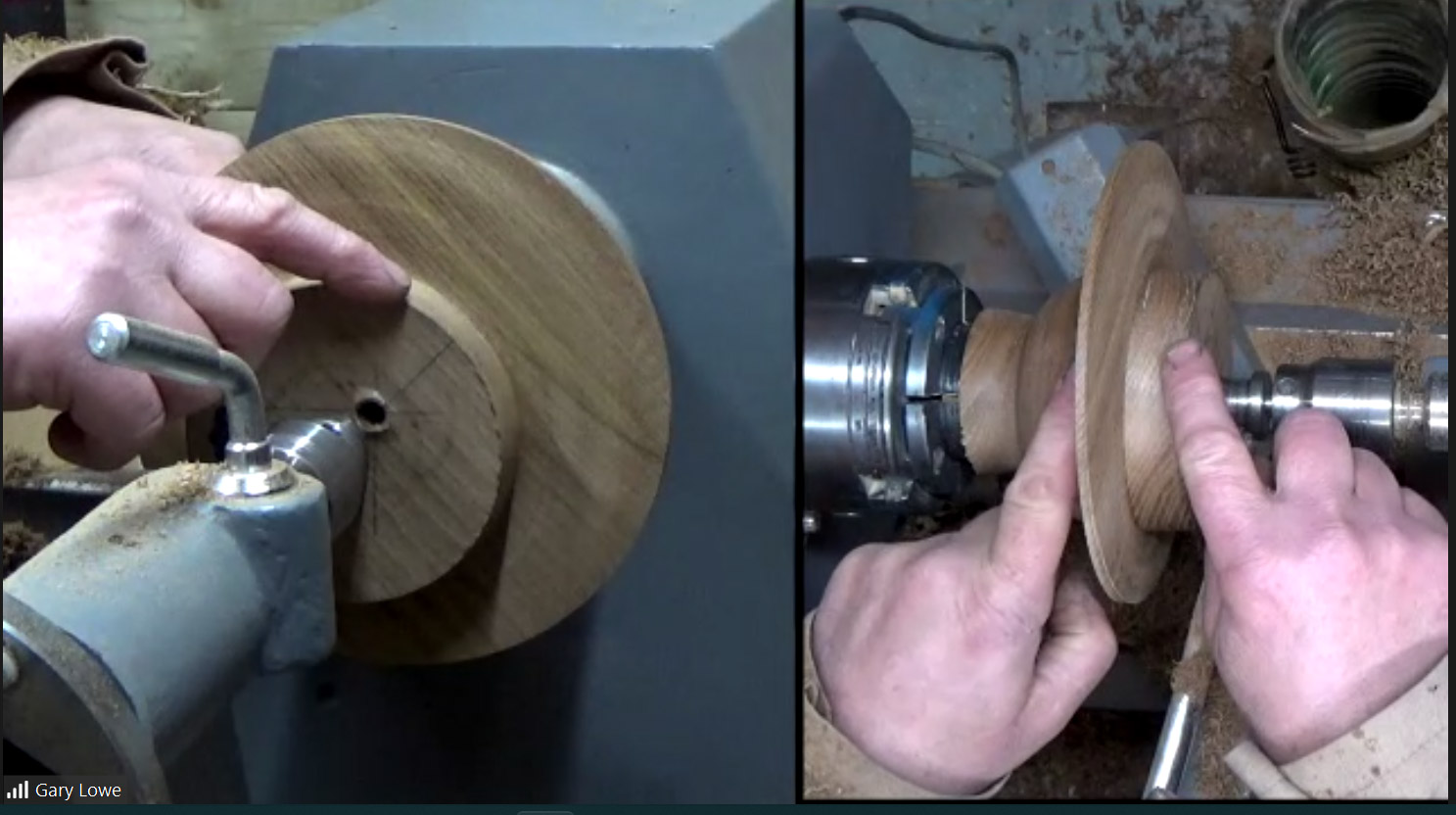 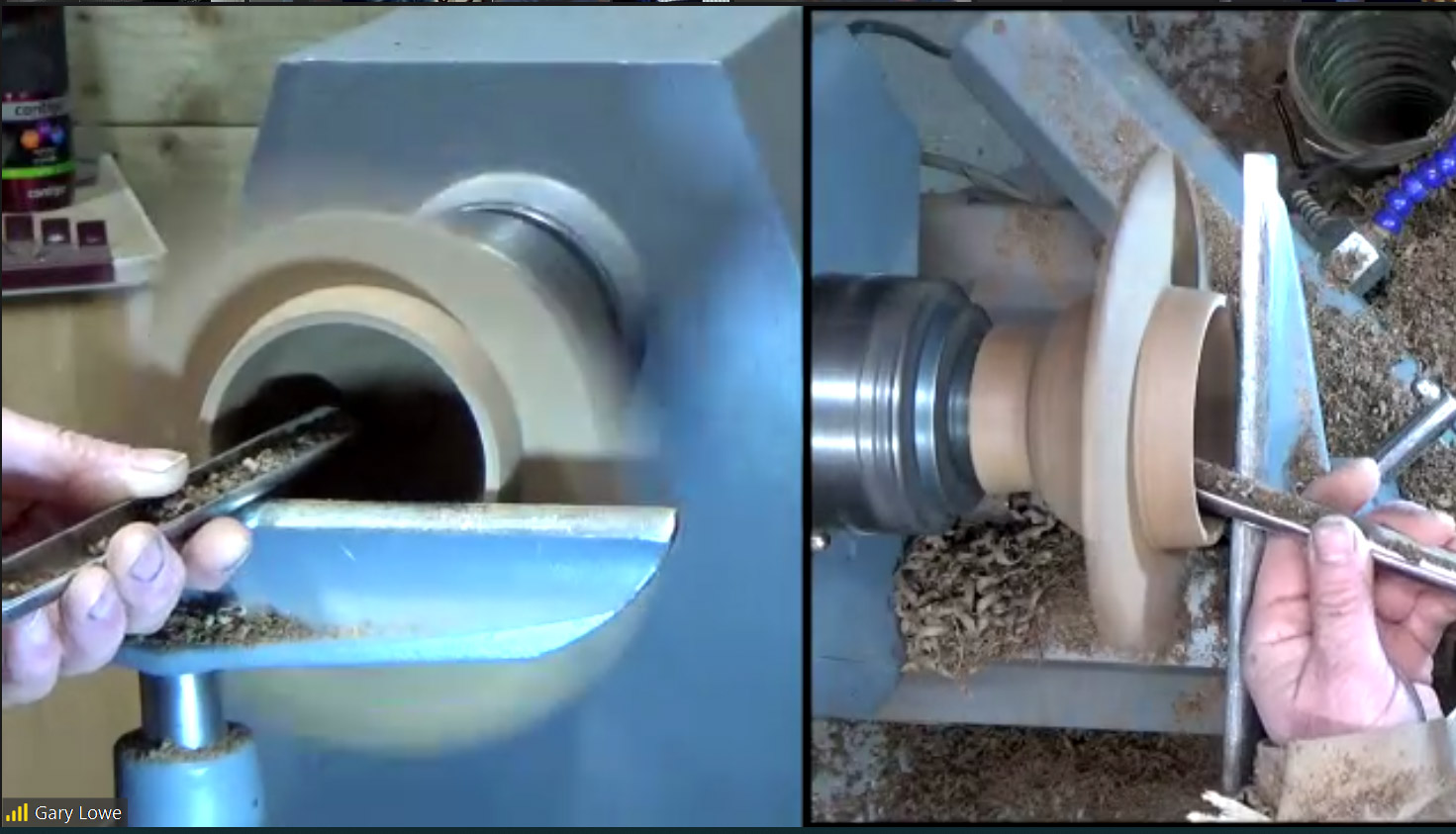 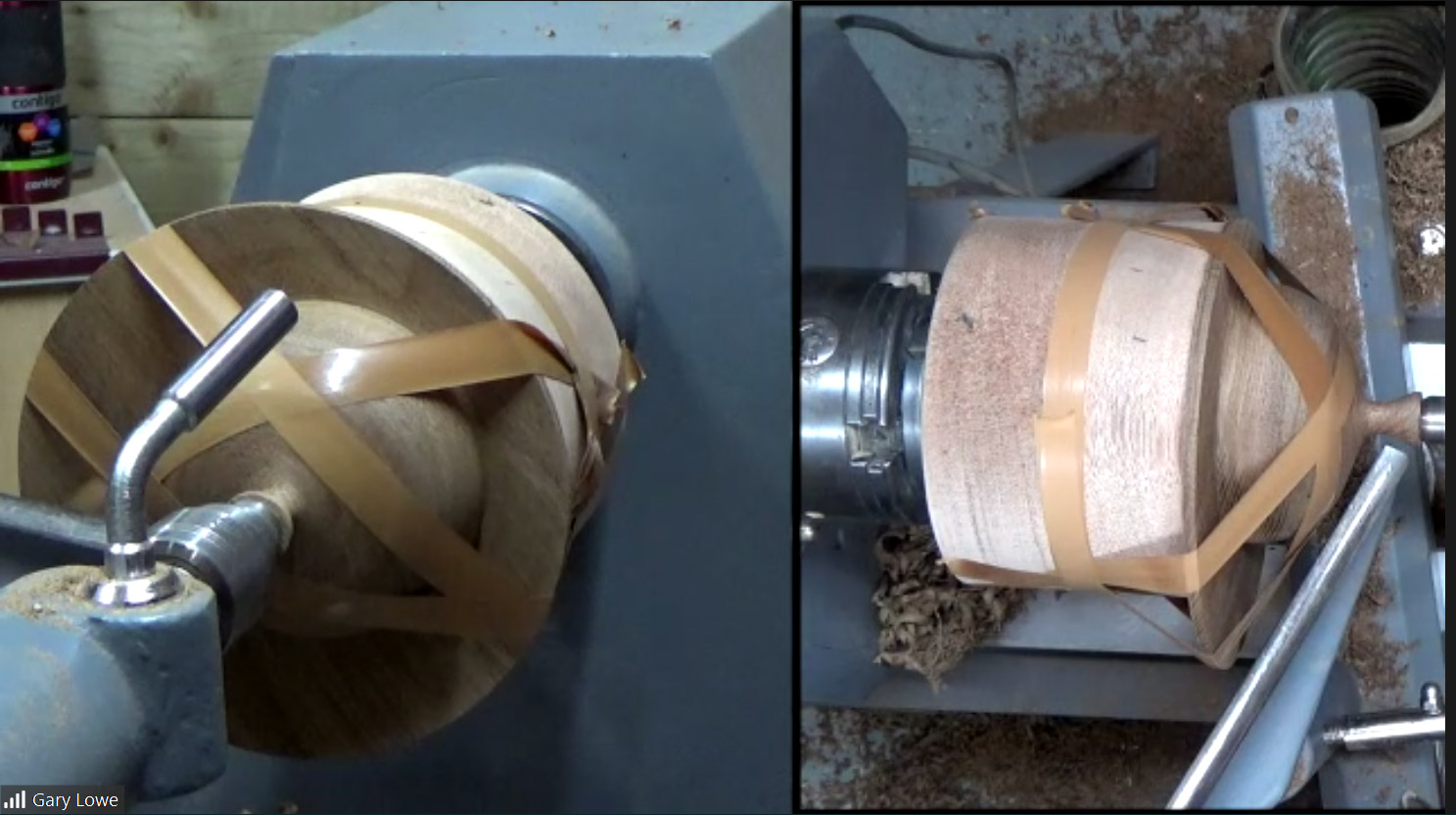 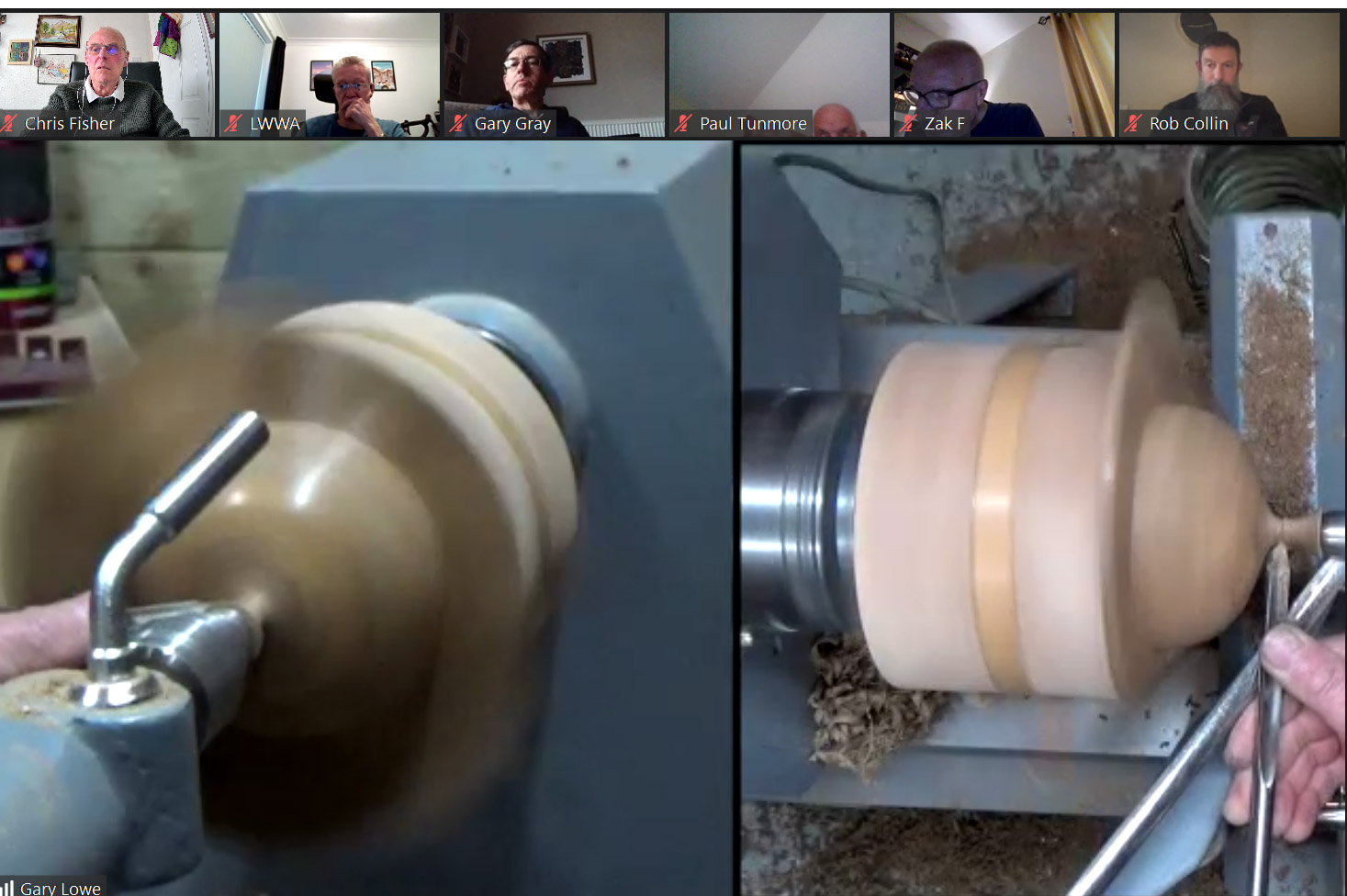 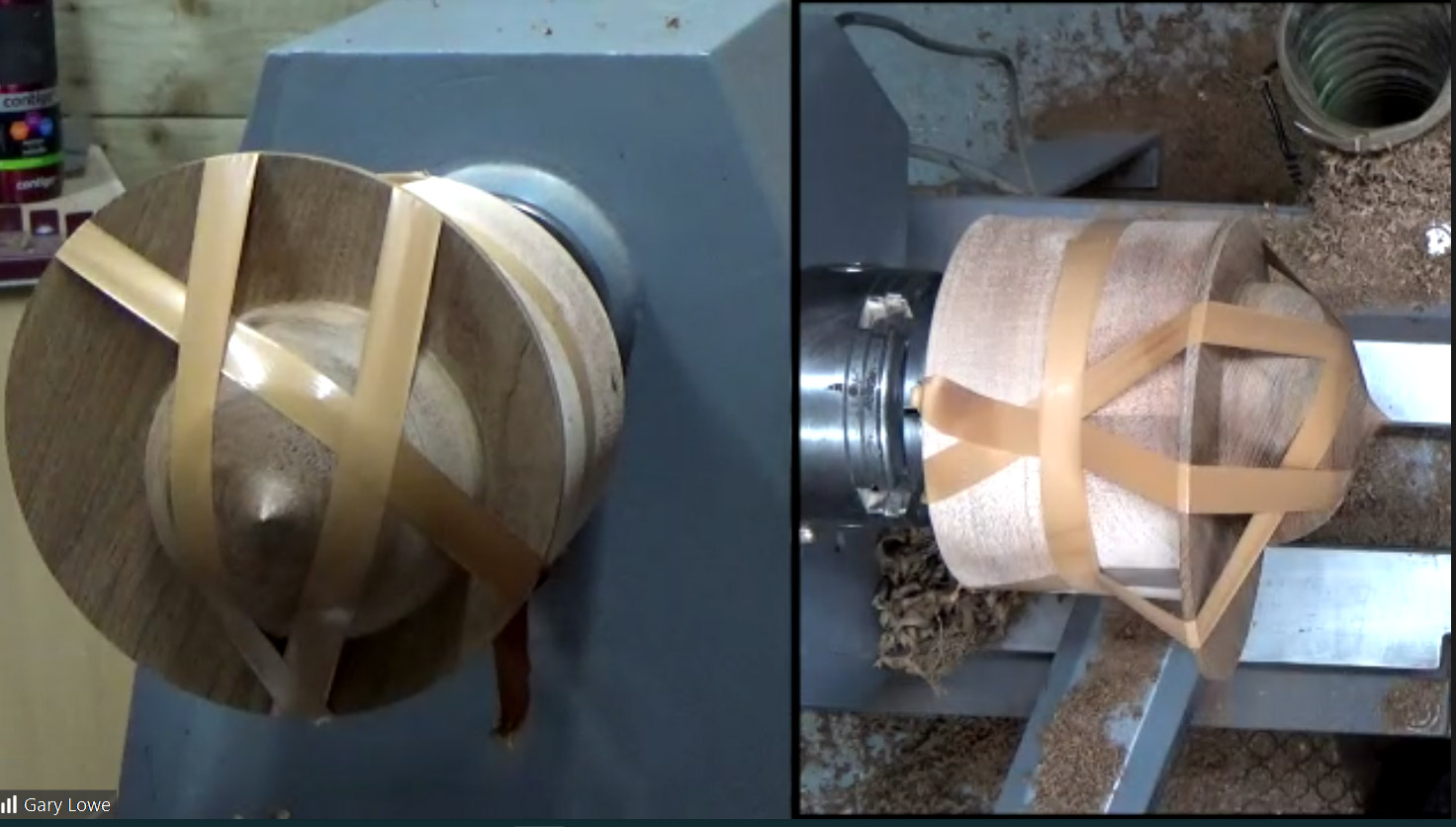 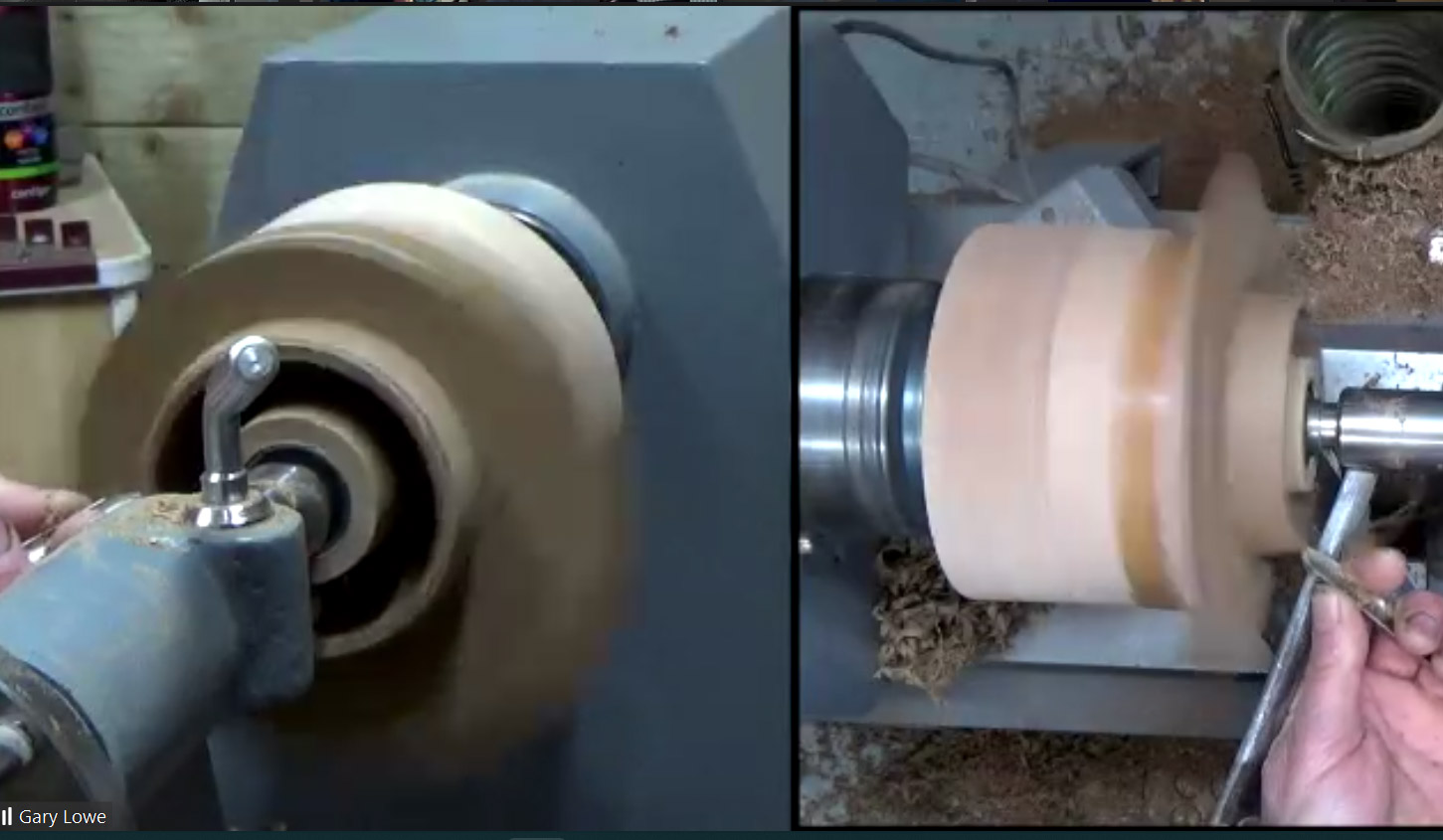 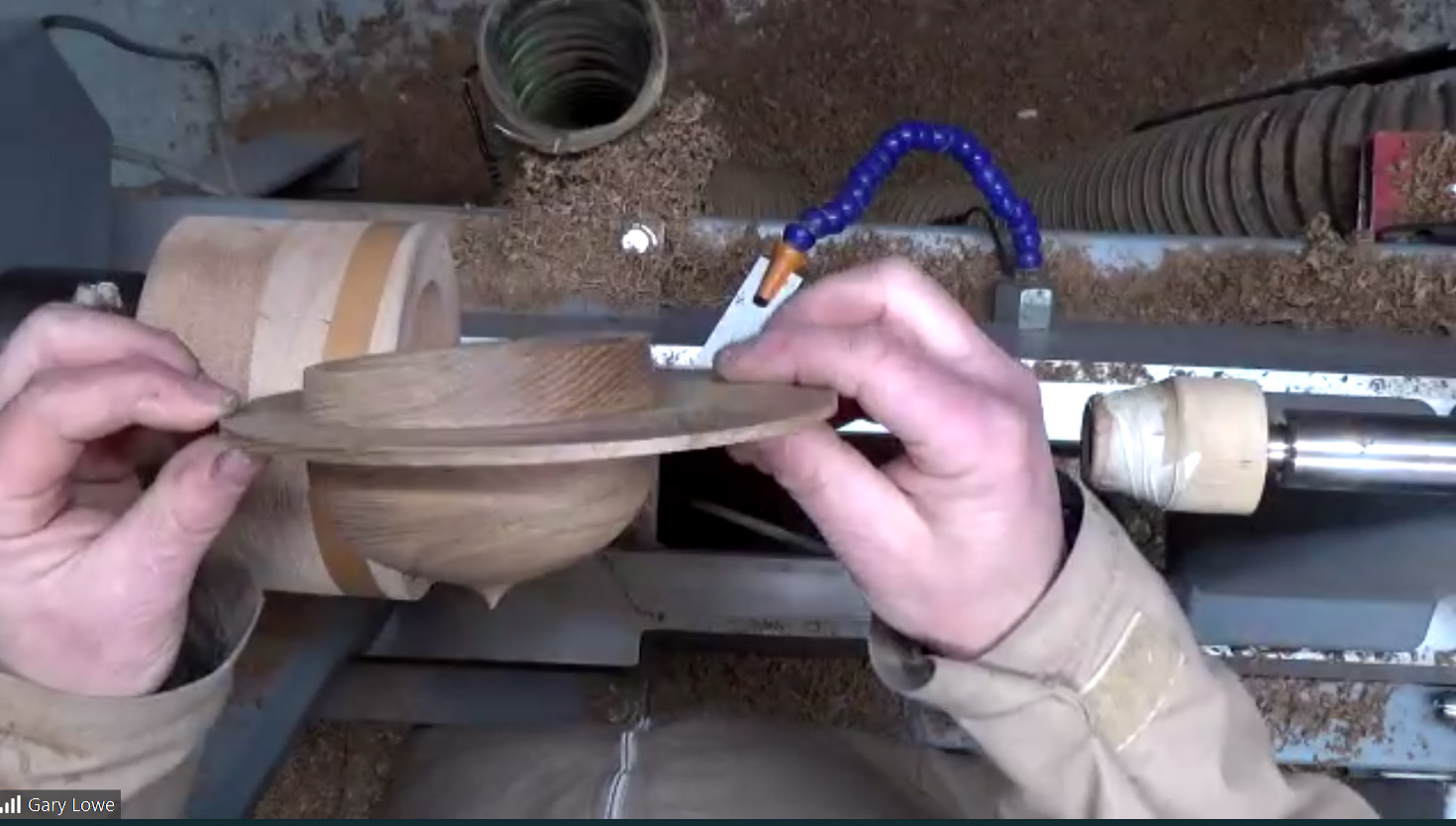 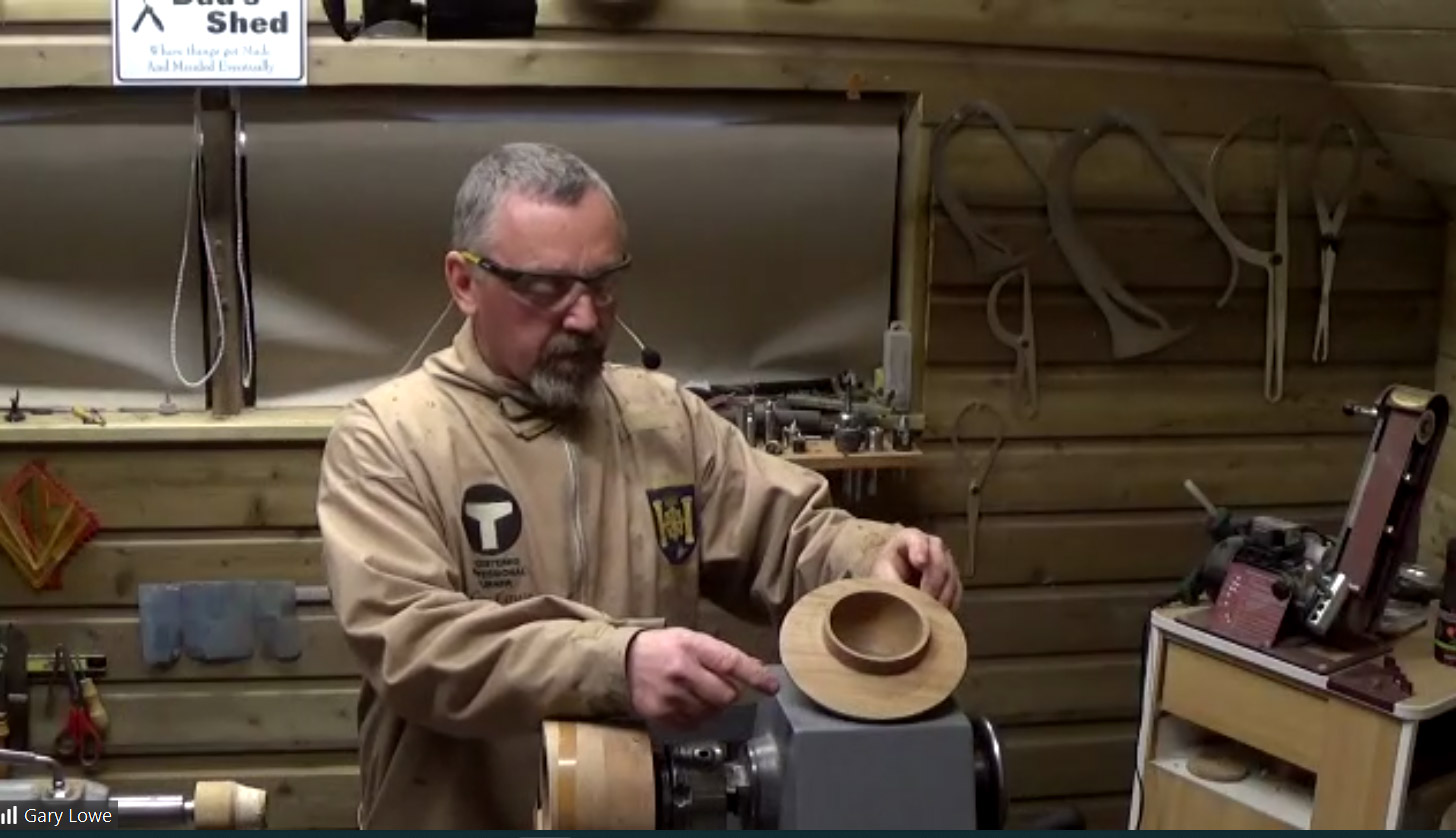 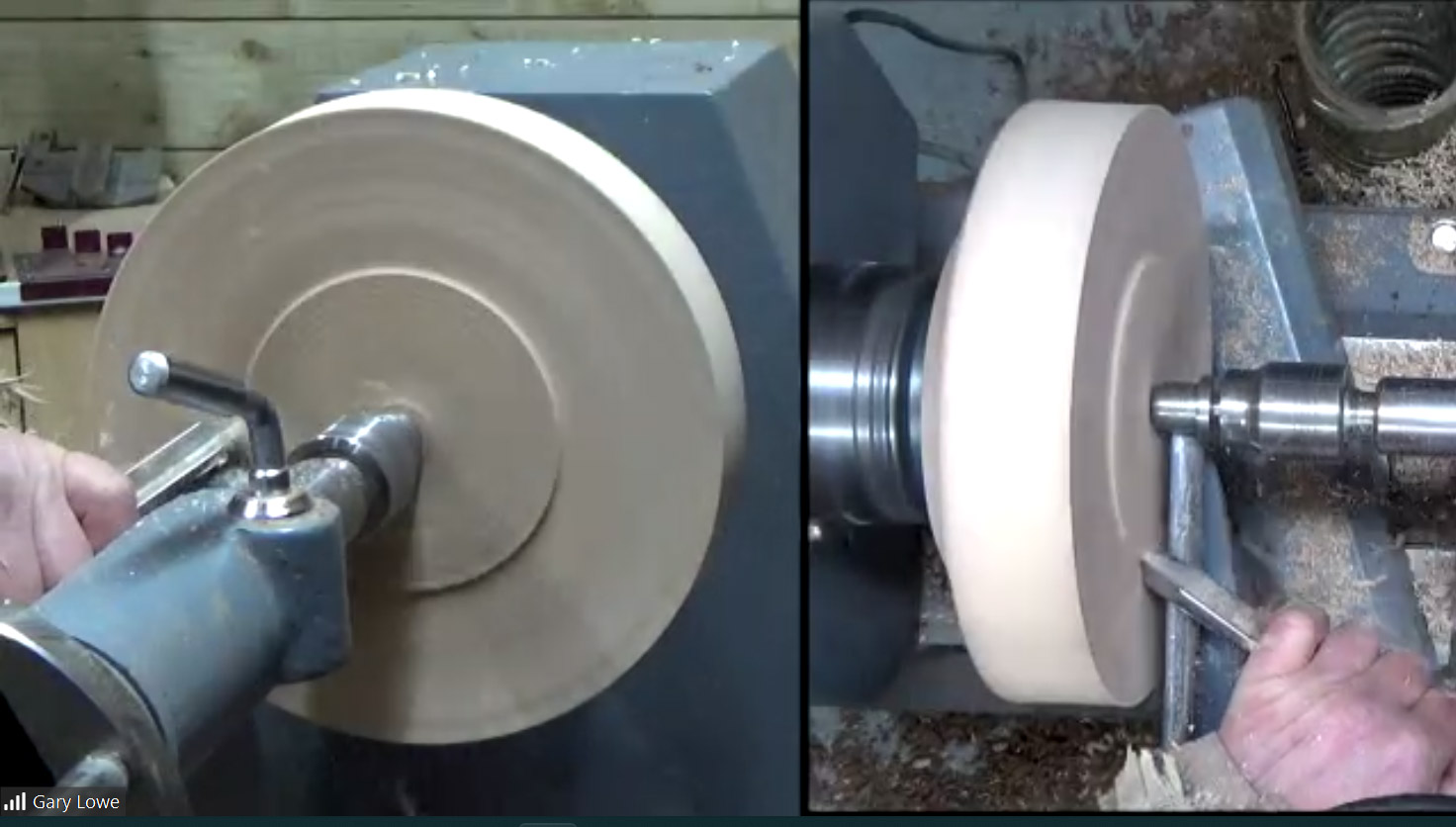 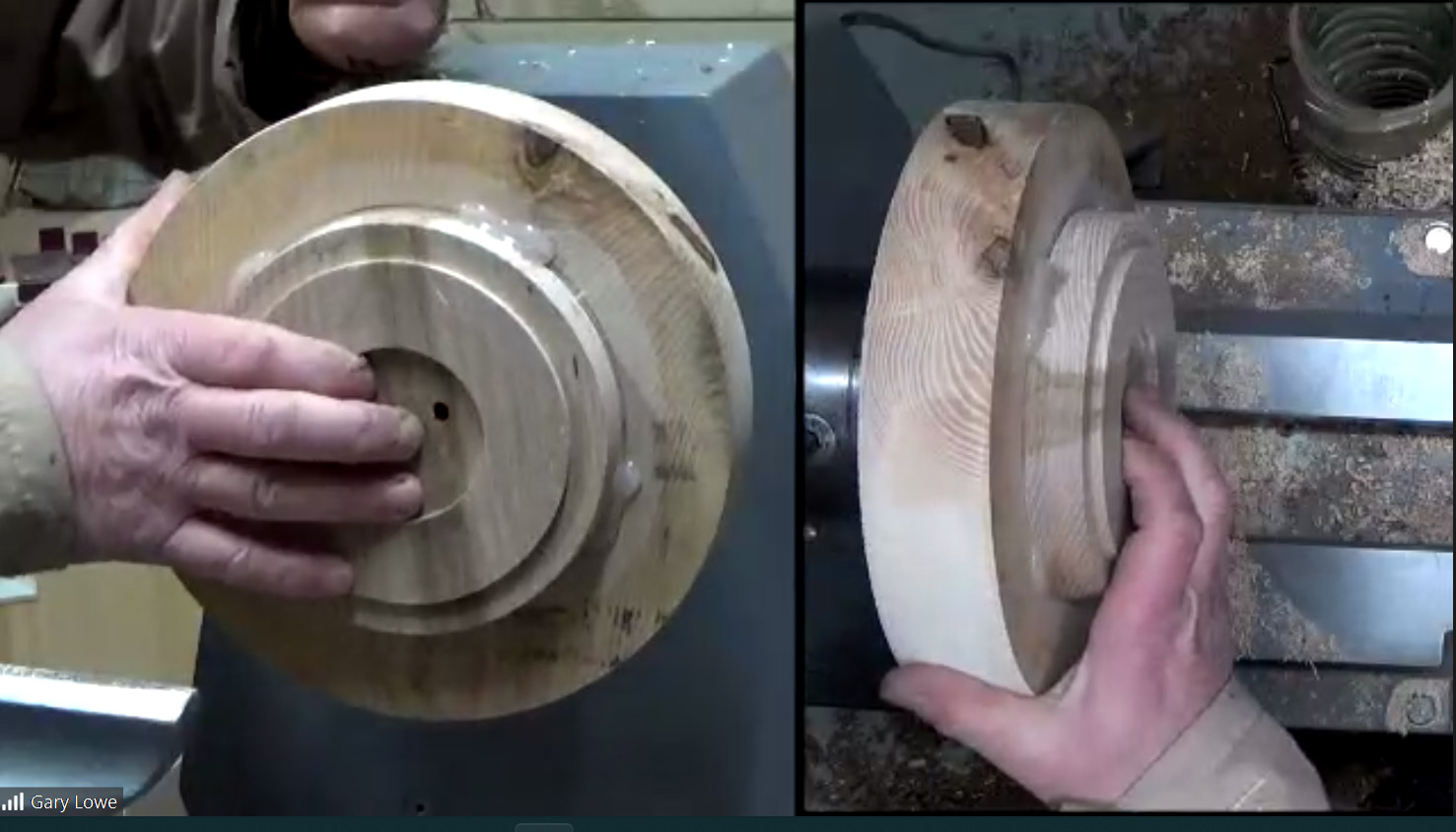 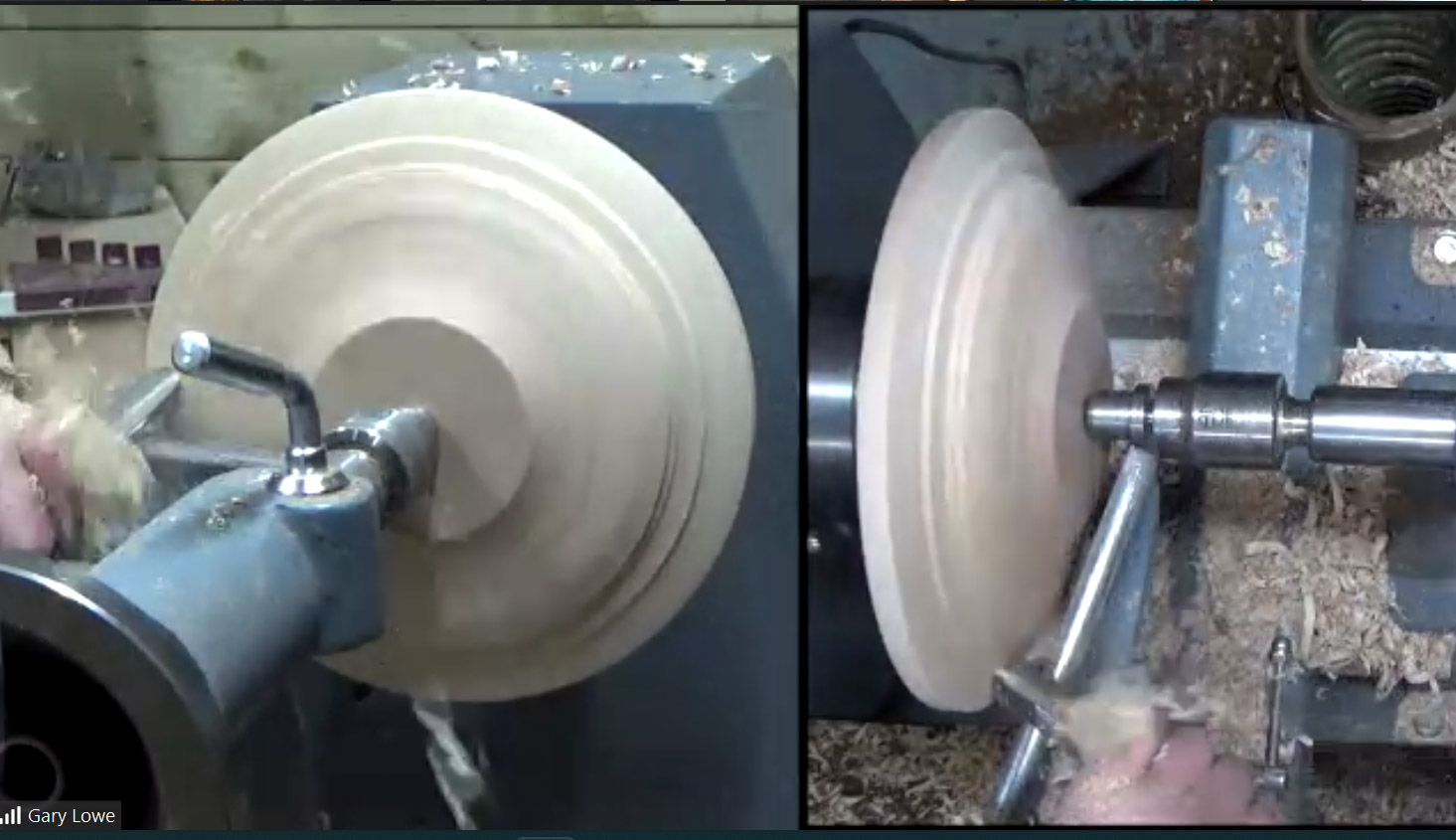 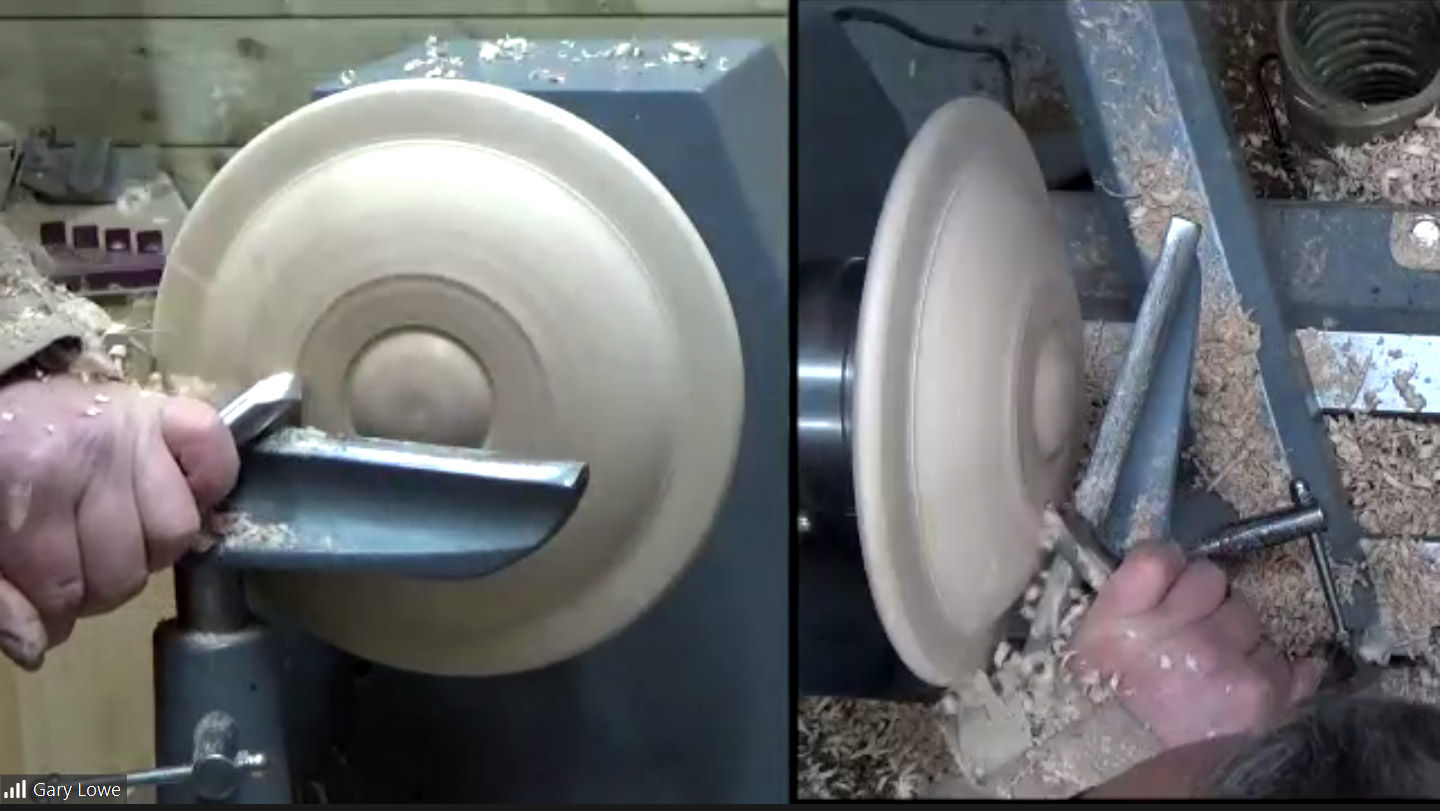 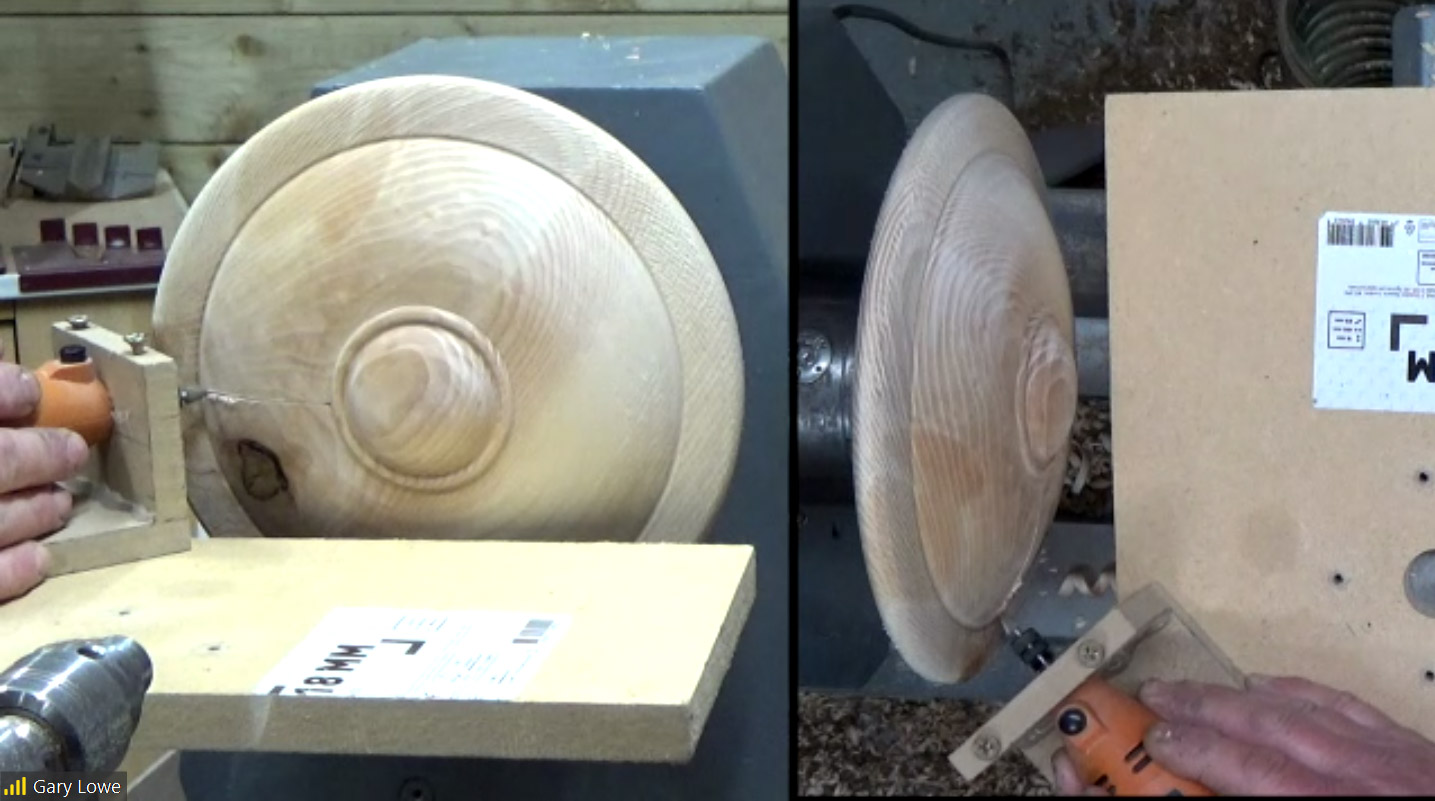 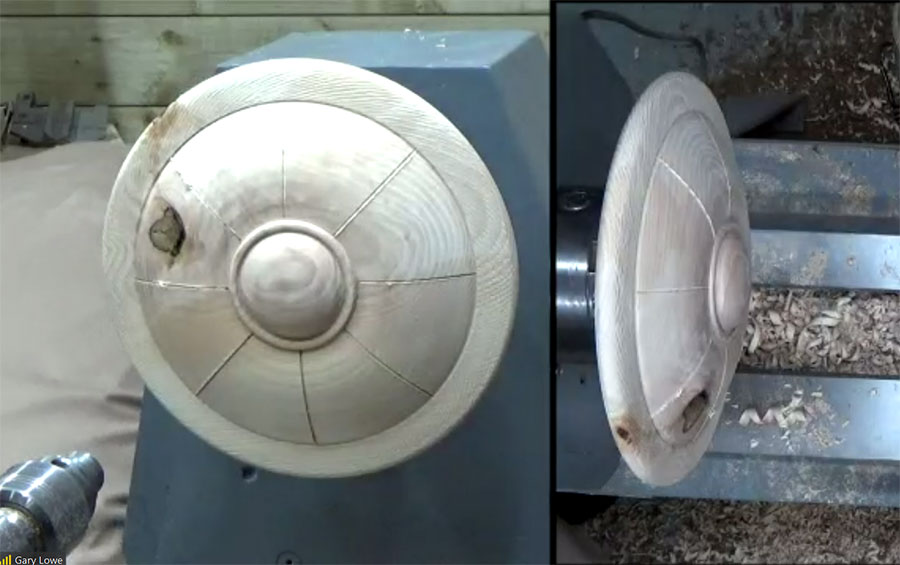 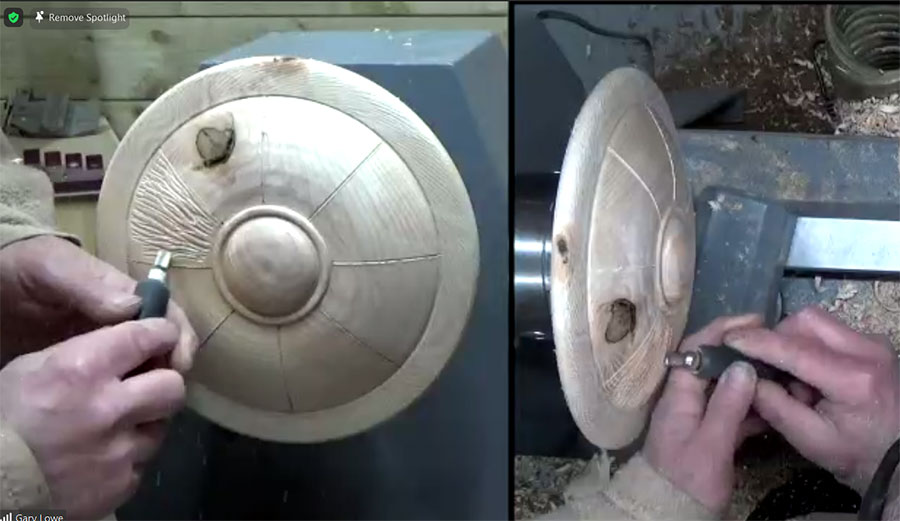 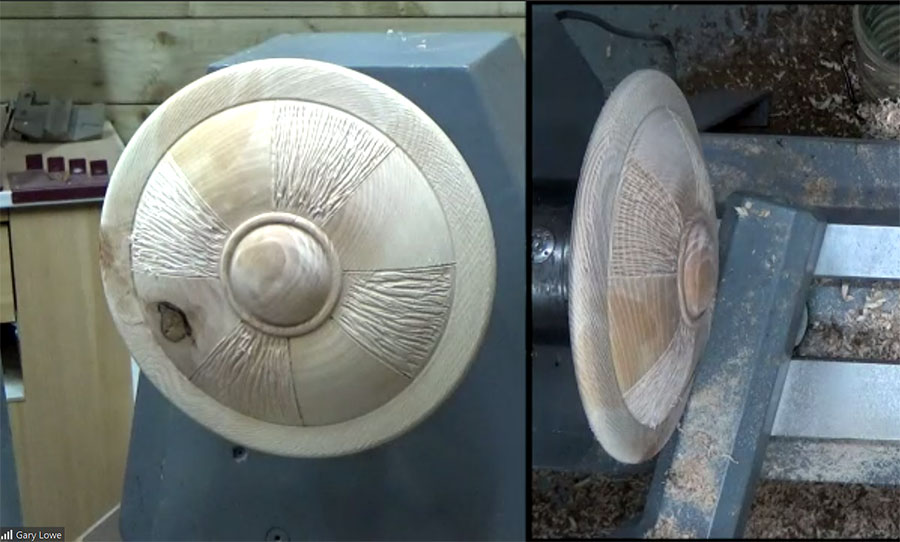 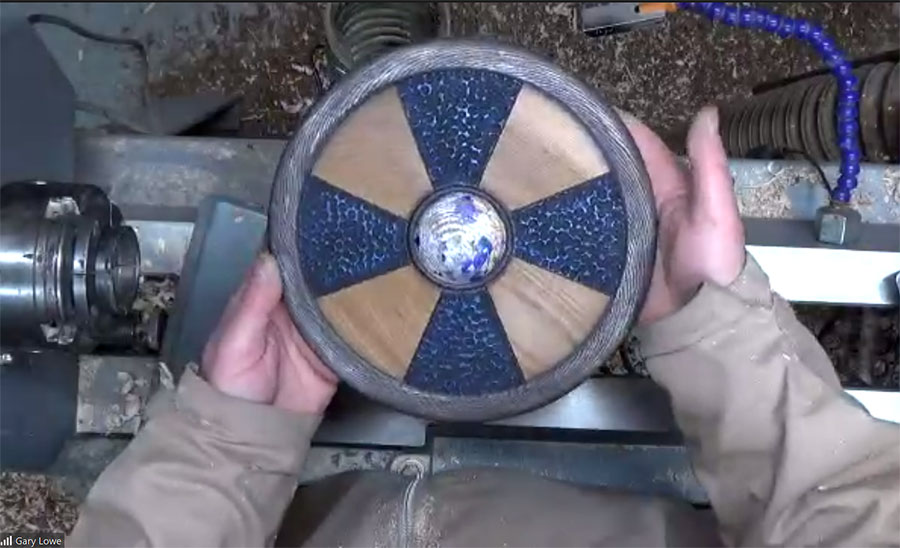 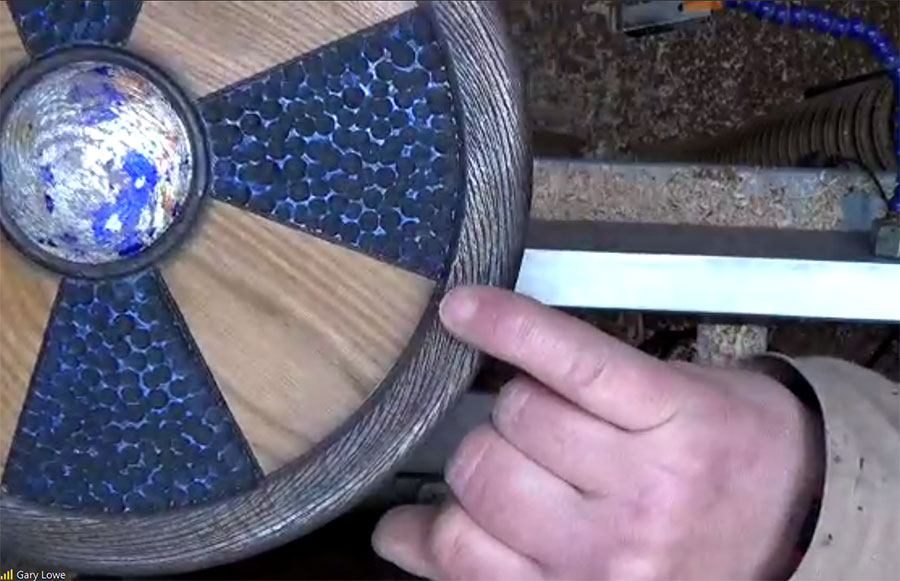 HANDS ON NIGHTS – Our next meeting is the Hands on Night in the hall on the 10th May, where we will have the lathes set up to have a go on and for you to learn for the masters!  The Shop will be open for business as normal so time to stock up.

ONLINE WORKSHOP NIGHTS – Then on the 17th May, we will be running our online Workshop Night, so if you have been busy making anything, please send in some photos to share in the Show and Tell, otherwise it will be very short or non-existent.

*edited as of 3 May 22 – I can confirm the online Workshop nights will continue  to be run every month on the 3rd Tuesday until further notice. There will be no planned closures over the Summer period as previously published. Please continue to support these nights the best you can.

NEXT ONLINE DEMO – On the 24 May 22 and we will be welcoming back to our screens, Cindy Drozda all the way from the USA.  Not one to miss, so PAYG members don’t forget to buy your ticket.  We are likely to be using her Zoom account for the demo based on the last one we did with her, so we will send out the correct meeting link in due course. 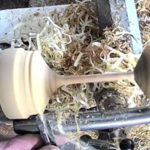 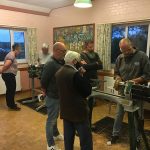