24th May 2022 Club Night I.R.D. with Cindy Drozda all the way from Erie in the USA; a second visit to the club from Cindy who first demonstrated for us in 2020 and back by popular demand. We were not disappointed as we were shown the methods, including things that can go wrong, on how to turn a full spherical box. The screen shots that were grabbed on the night show various stages of the process. 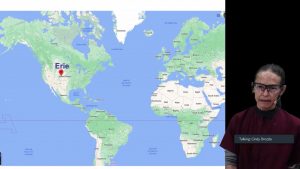 Over 30 members tuned in to the Zoom meeting hosted by Cindy who started the night with a quick tour of her workshop and offered to stay on at the end for anyone interested in her digital setup, adding that she would send us notes and measurements of the piece she would create.

This will be quite a long description but hang on in there.

Then on to the demonstration, a 2 ¼ Madrone Burl blank, A north American native tree, was mounted on prepared tenons and roughly turned to round, Cindy showed detailed plans she uses to ensure complete accuracy whilst turning. What looks like a complicated project is certainly simplified by sticking to the plan. Decisions made on top, and bottom of box made; the timber parted off and first half mounted to hollow out and create the mortice half of the joint, mortice first to make it easier to adjust the tenon later for a good fit. 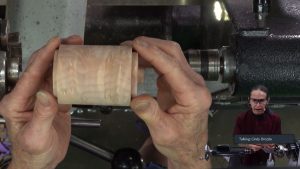 First rough hollowing with a bowl gouge and then refined with a negative rake scraper. Throughout the demo Cindy explained tools used and different benefits of alternative grinds etc. A custom negative rake scraper was used to create the mortice, ensuring accurate measurements to prevent future problems when fitting box together. A quick power sanding with a shaped mandrel attachment and onto the other half of the box.

Cindy used different methods on both halves of the piece, in the way she drilled the depth holes and said that there a many ways to achieve the same results, explaining these as she went along. With part two ready with the tenon formed the two halves were now joined together, at this stage only the insides had been worked on; and the round was mounted between small Steb centres to allow maximum working room at each end. The outer diameter was decided, and a small chamfer formed along the joining edges, this would come in handy later if adjustment needed as it will give an indication of wall thickness of the piece. These were the kind of tips that Cindy managed to drop in along the way and what makes live demonstrations so appealing. 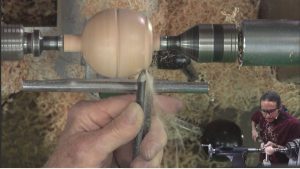 At this Stage the sphere started to be shaped by eye using a bowl gouge, the all-important measurements checked along the way, when the shape was nearly round a ram chuck was introduced to hold the box with the aid of a revolving cup in the tailstock, this was a commercially made one, it was explained you could make your own.

The shape refined even more before the ram chuck itself was trimmed to fit the shape exactly. Now the tailstock can be removed, and the box turned to a perfect sphere by turning it in the ram chuck in various different orientations. A light sanding followed with tips on getting that good finish we all aspire to. Cindy also signed the piece, on the edge of the tenon, as she has promised to send the finished article to the club for us to see.

At the end, as promised we had an in-depth tour of the workshop along with several questions and for those geeky guys who wanted to know about the technical side of Cindy’s digital setup, she was more than happy to show us around and really interested in how we were doing as a club. 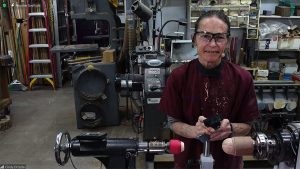 Please have a look in the GALLERY full all the other pictures we grabbed, all used with the kind permission from Cindy to see what a great presentation it was.

21 June 22 – Online Workshop Night on Zoom from 7pm.  If you have items to put into the Show & Tell, please send them to us HERE. 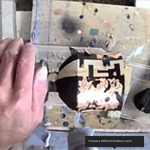 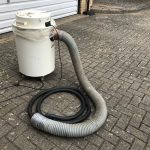 For Sale – Dust ExtractorSales and wants