Welcome to our Digital Club Night

We tried a new format for the Club on Tuesday 16th March, not a chat, workshop or demo night; we called it a member’s Digital night. The idea is to encourage and then engage more of our members to get involved by making small videos, either a workshop tour or a project that they have made.

The evening was slightly delayed as the ‘tinternet’ tried to prevent us all from logging in, however, we won and watched a short introduction video of what you can use, pieces of equipment that you already have to hand, e.g. iPhone, android phone or tablet or digital cameras all have the capability to produce good quality video, this was not in depth but hopefully you can see that you already have the capability. Full support available if you are not sure, just get in touch.

Meet our turner slot with Chris chatting to Martin P, who guided us through his woodturning journey from inheriting his lathe and equipment from his dad and his rise, via various roles in the club to Vice chair.

Following a short comfort break although several stayed and chatted, we had a guide from Chris on how he removes the tenon from his work, he had videoed and then voiced over as if he were a third party which made it entertaining as only Chris can do.

Dai one of our prolific contributors to the show and tell feature gave us a video tour to his workshop, this inspired our usual banter, and during this, he described a ‘doughnut mount’ for removing tenons from bowl bases which he duly dashed to his workshop to ‘show and tell’ how it works.

Martin P back on screen with his workshop video on fruit turning, an apple from start to polish and all stages between. We have seen lots of methods recently for fruit turning which shows just how much we can all learn from others.

Finally, a shallow Yew dish from Zak who tried to atone from his failures on workshop night with wet Yew, this time all was well, and an acceptable piece was achieved. 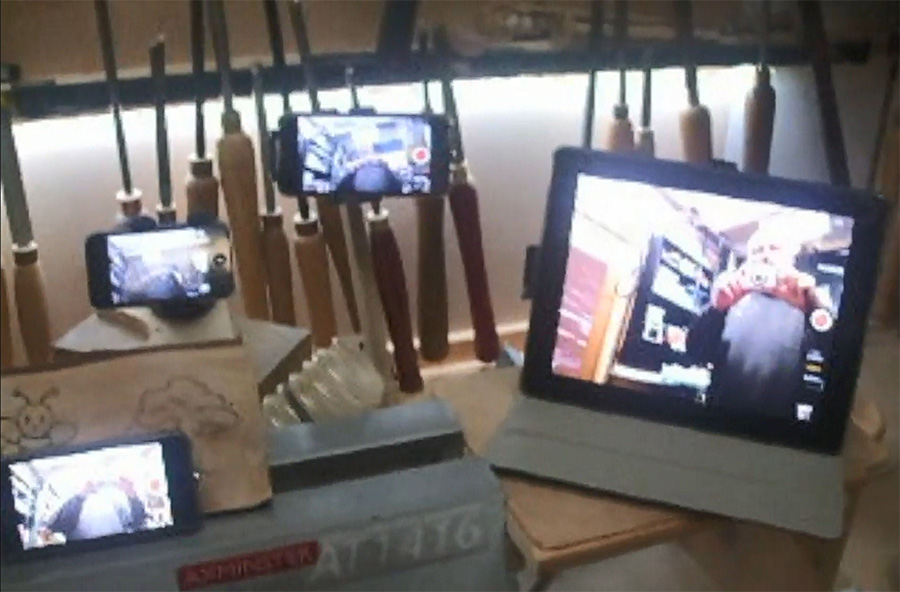 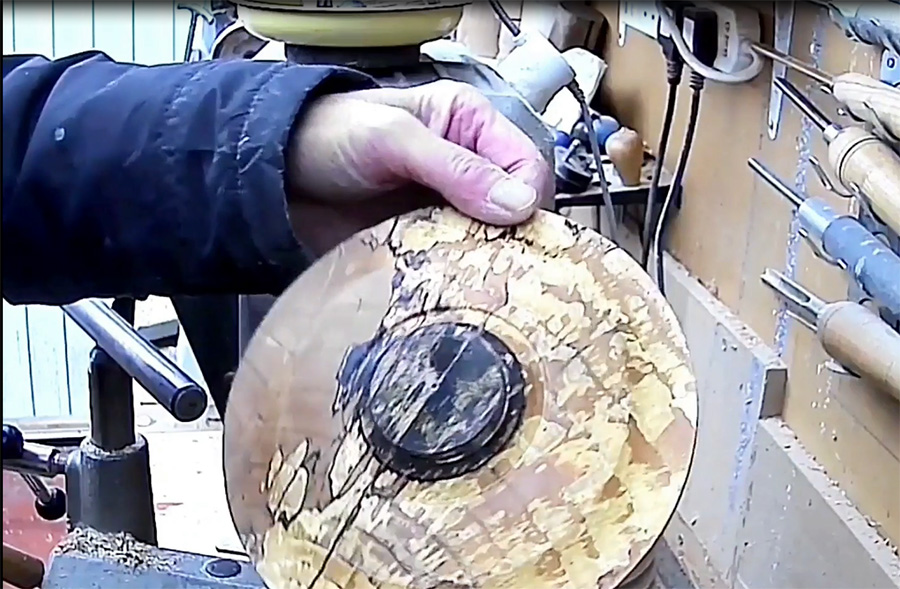 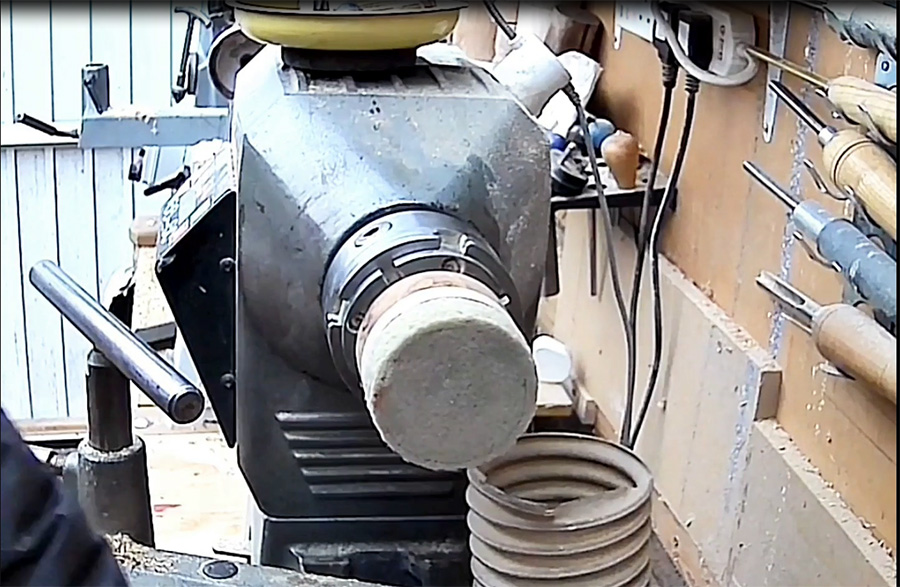 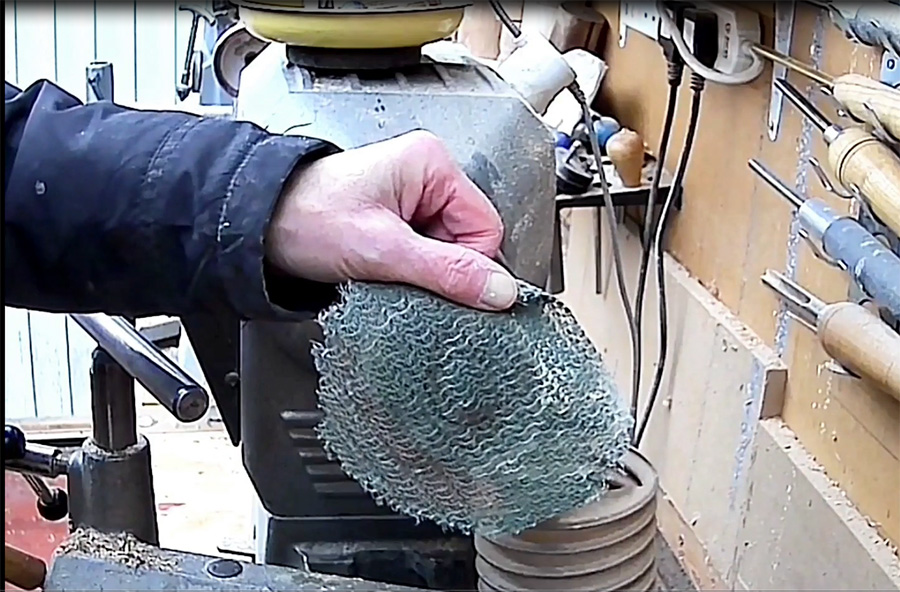 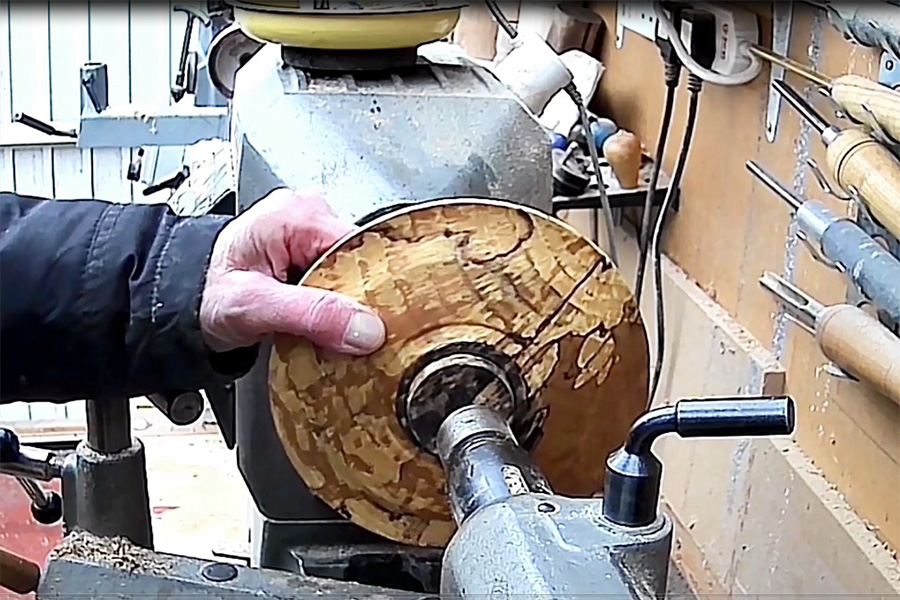 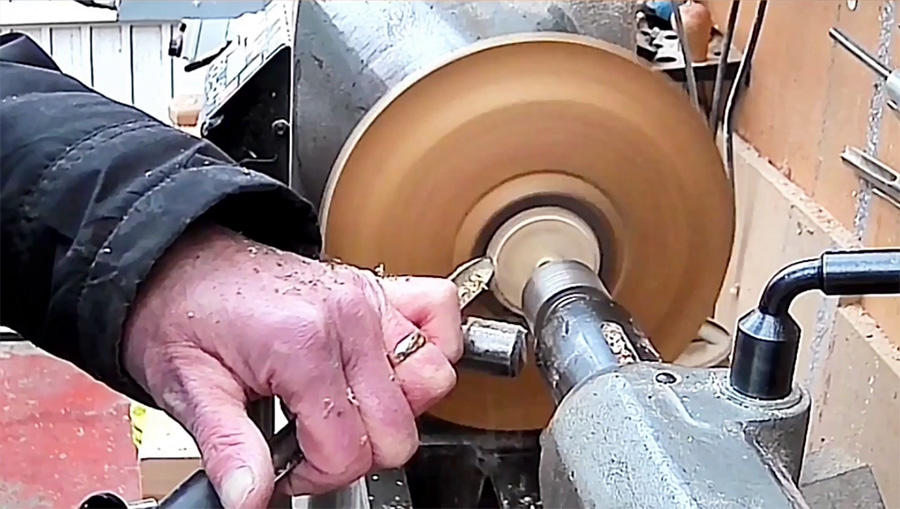 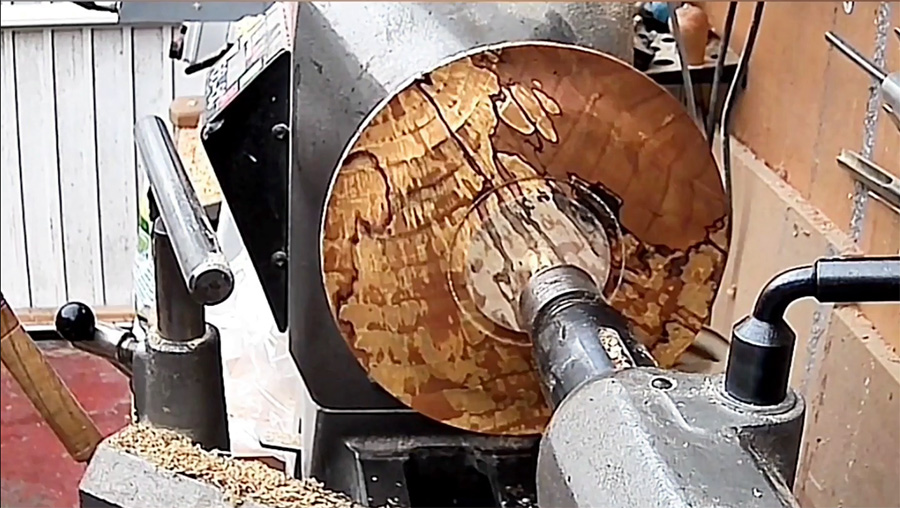 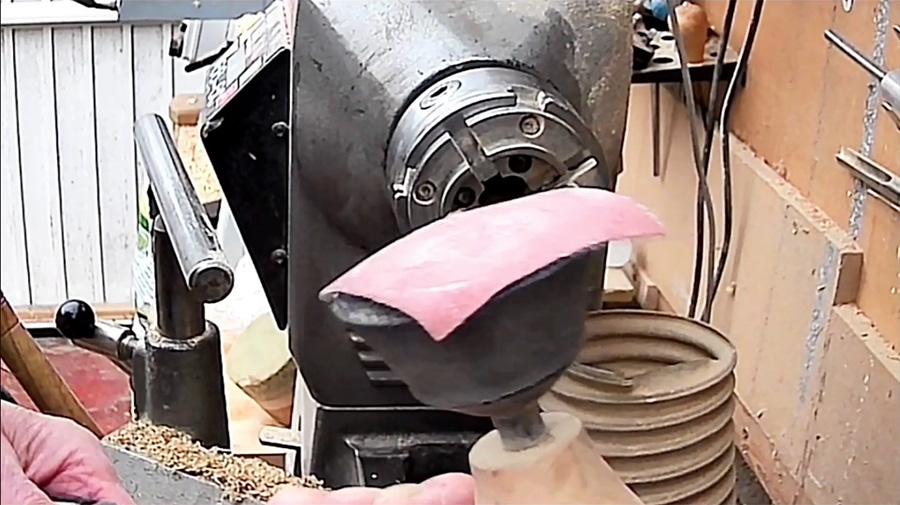 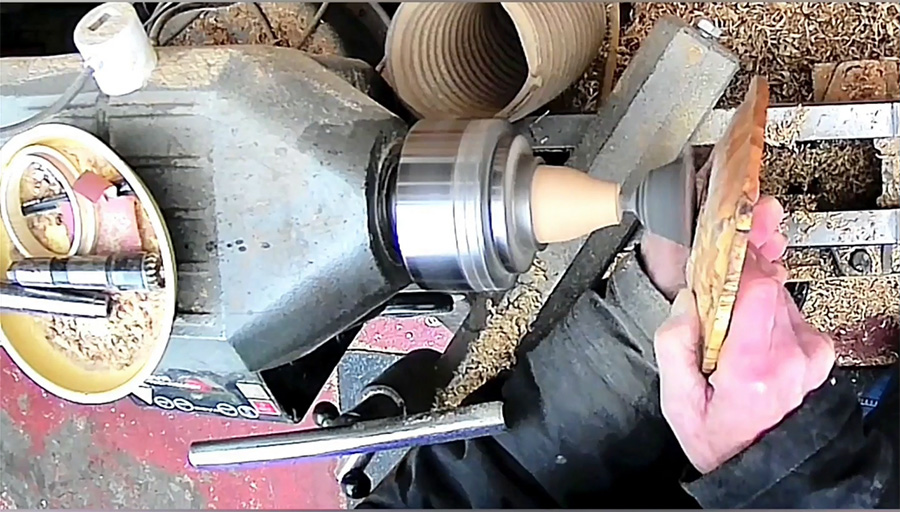 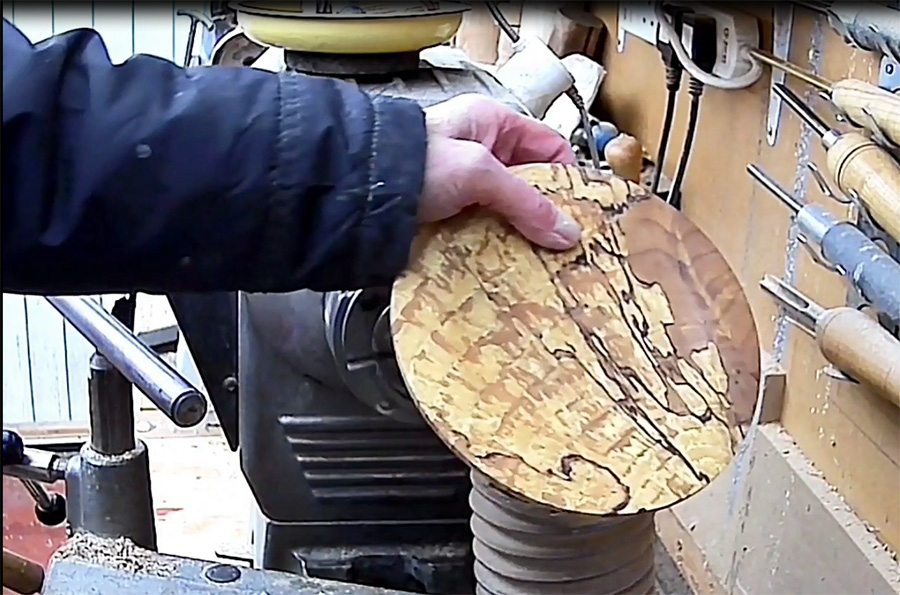 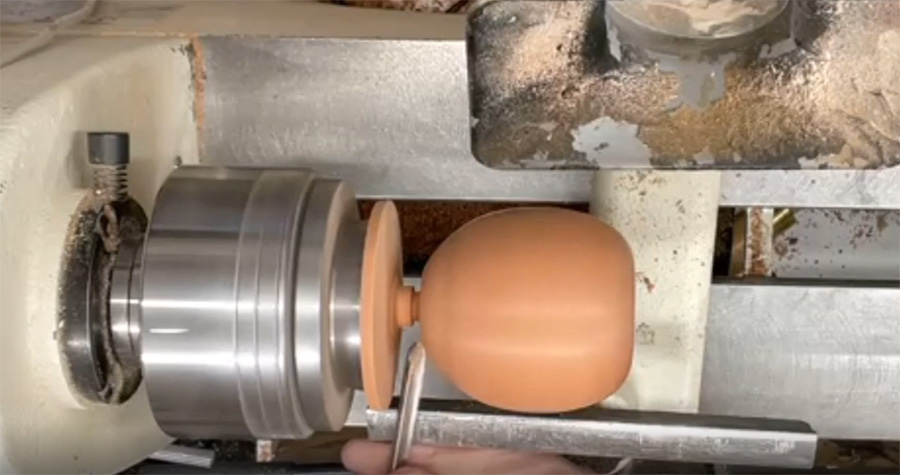 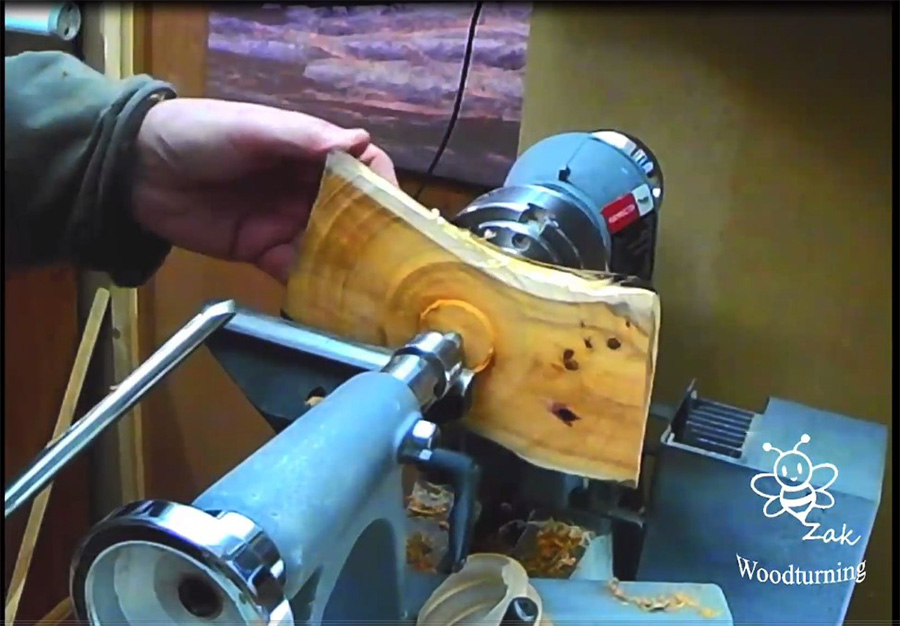 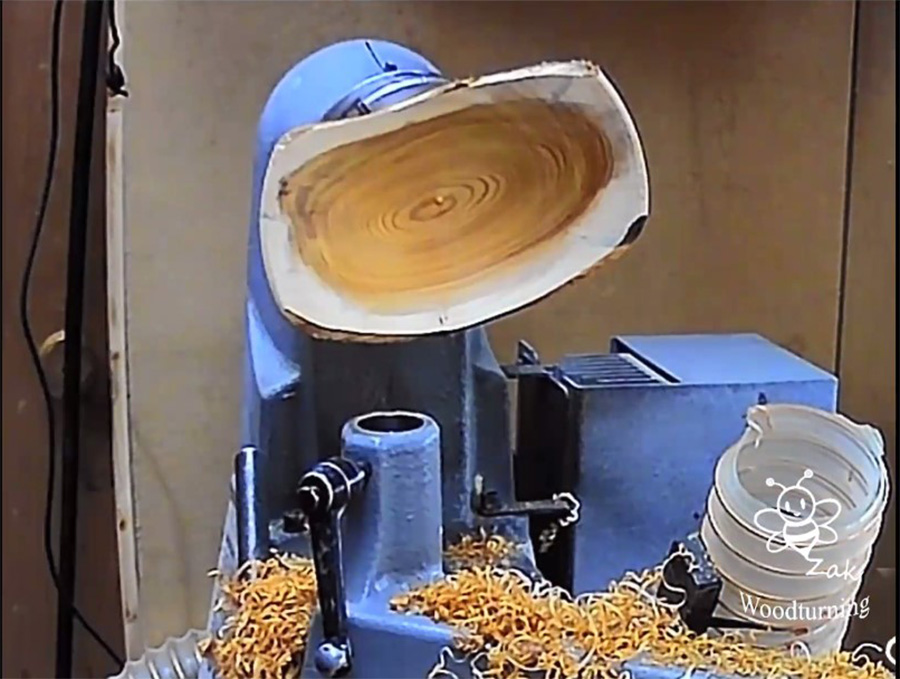 After the success of the meeting, we have decided to do another one on the Wed 5 May 2021.  We therefore need your videos so we can watch someone else for a change.  So this gives you plenty of time to grab your phone, video camera, etc and get filming in your workshops.  Videoing yourself turning is actually also good so you can watch it back to watch your technique.  As Zak has shown us, he had a wide range of old devices that he no longer uses and they all worked great.  You also do not need any fancy camera mounts, get ingenious and make something out of wood and clamps.  If you do want to take it further and get a bit more high tech, have a look at our YouTube channel, as Zak has done a series of videos on the software we use.  Remember, we are here to help you so get in touch if you are struggling.

Once you have some video ‘in the can’ as they say, contact either Alan Buckle or Martin Pigott and we can then sort out getting a copy of your video ready to show at the next meeting.  If you have any problems or queries on this just get in contact and we can help you.

We have had several of you kindly providing photos of items you have made, which is brilliant and please keep them coming.  We use them in various places, such as on this website, in the Show and Tell power point, Instagram and Facebook.  Each one of those want a slightly different format, for example:  Instagram needs a square photo, whereas most of the others work best with a landscape (6 x 4) type photo.  Don’t worry, we can do any cropping as necessary, but if you have already cropped it down or taken a close up or a portrait photo, its then hard to use it, where we need a landscape picture.  So can you please take the following into consideration when taking your photos:

Don’t forget we have an online demo by John Boyne-Aitken this coming Tuesday 23rd Mar 2021, so see you there. 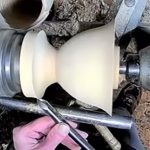 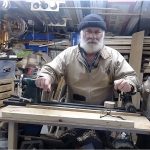