Last month in a new feature of interviewing club members, Zak had the dubious honour of interviewing Chris, so it seemed only fair that this month’s meeting started with Chris returning the favour by interviewing Zak. We learnt that although Zak had tried woodturning many years ago he only took it up seriously about five years ago. Having overcome serious illness in his youth he has adopted a policy of always rising to a challenge and has brought that mindset to his turning. Zak is keen to learn new techniques and is prepared to use his abilities to help others whilst at the same time does not hesitate to seek advice from his peers when he encounters a problem. Zak has played a major part in taking the club forward during the pandemic and despite the mutual criticism, that has become an art form between Chris and Zak, it was apparent that they like each other really, but don’t tell them that.

It was now time to use the Breakout Room feature of Zoom to see what our three regular turners were doing this month:

Zak, rising to the challenge of a cold workshop had installed a heater and showed us a piece of ash and a piece of whitebeam from each of which he would turn a bowl and a natural edge bowl respectively.

A look into Alan’s room showed him fighting off the cold wearing a padded jacket and a woolly hat, no heaters here. Despite this Alan had a piece of Sycamore from which he would turn a square bowl.

Last but not least, we found Chris, not in his cold workshop but very comfortable inside, demonstrating the art of pyrography. In view of the weather this choice seemed to be a very shrewd move.

As the evening wore on Zak shaped the outside of his ash bowl demonstrating how to obtain a smooth finish using the combination of a sharp tool, and a shearing cut with the handle low. We saw some very fine shavings being produced resulting in a finish that requires minimal sanding. At that point Zak put the bowl aside to be completed at a later date and put the piece of whitebeam on the lathe from which he turned a very elegant natural edge bowl.

Alan continued to make progress shaping the outside of his square bowl demonstrating the techniques required to maintain the square corners as the shape of the bowl is formed. Having seen some tear out there was some discussion amongst those present about the best ways to eliminate it. Once again shear scraping with the wing of the gouge proved positive.

Chris ably demonstrated pyrography showing the different techniques required to achieve different patterns on the wood. He also stressed the necessity of keeping the tip of the tool clean as carbon builds up on it as the wood is burnt. Again there was lively interaction from those present in the room.

The penultimate item of the evening was the usual show and tell feature. This month members had been asked to submit photos of their work which Martin showed on screen accompanied by a description of the item by the turner in question. This method was very successful and we saw some excellent exhibits from ten members.

Finally, we were shown a video made by Chris, showing the techniques required to apply gold leaf to the inside of a textured bowl.

All in all a very entertaining evening and, it has to be said, a meeting that would not have taken place had we been meeting in the hall because of the adverse weather. We look forward to seeing you in two weeks’ time when Martin Saban-Smith will be the demonstrator for February. 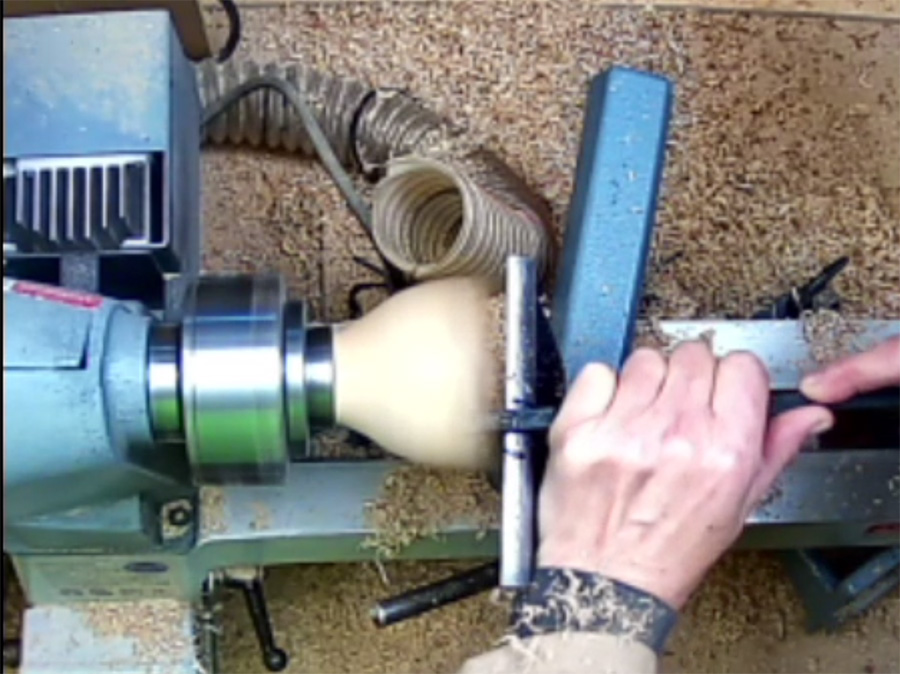 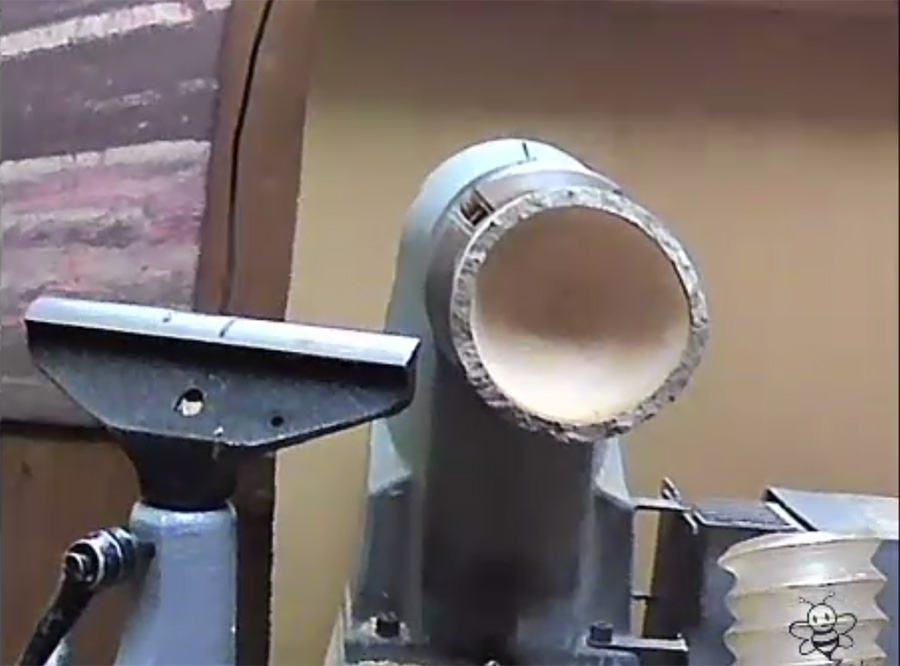 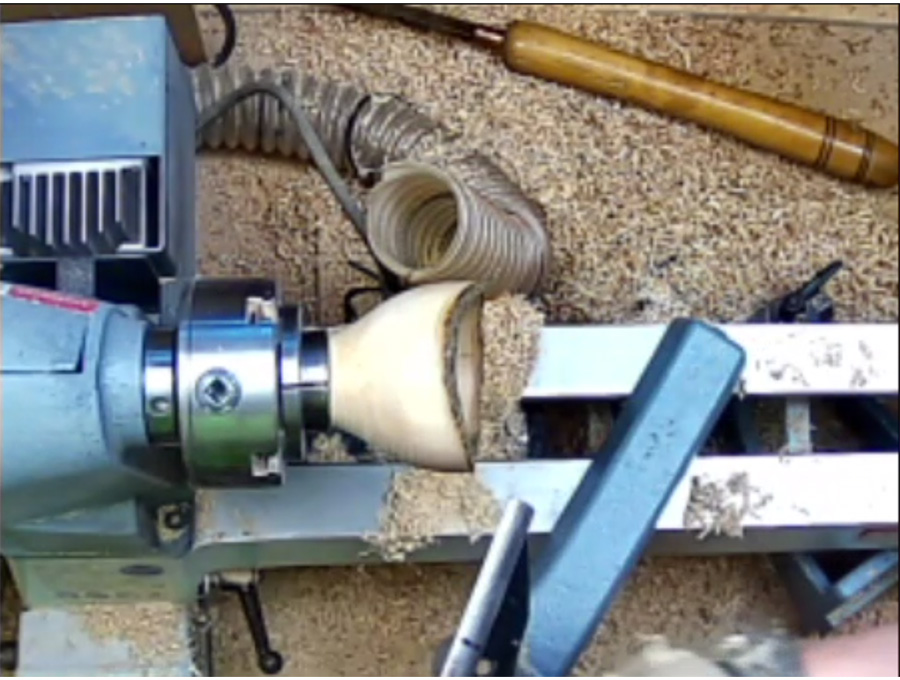 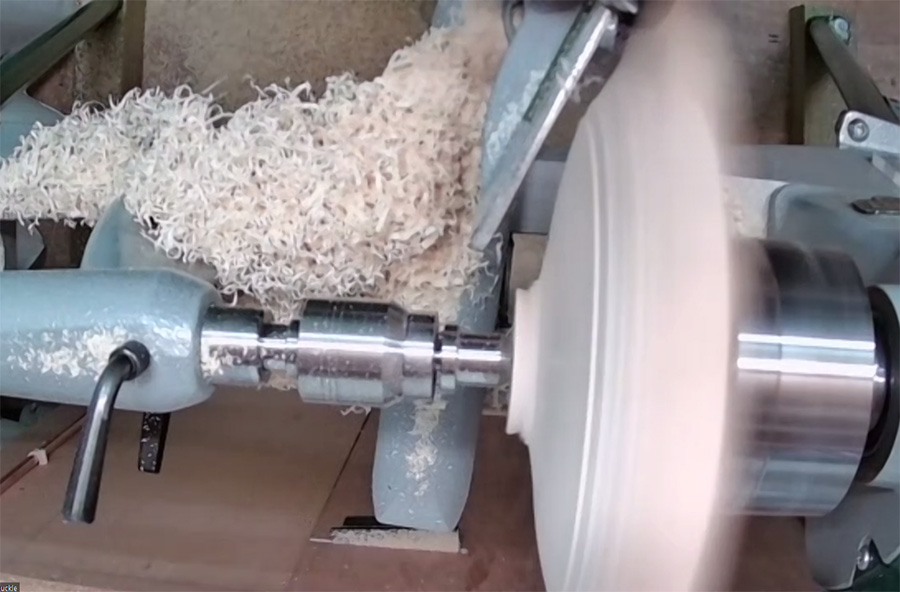 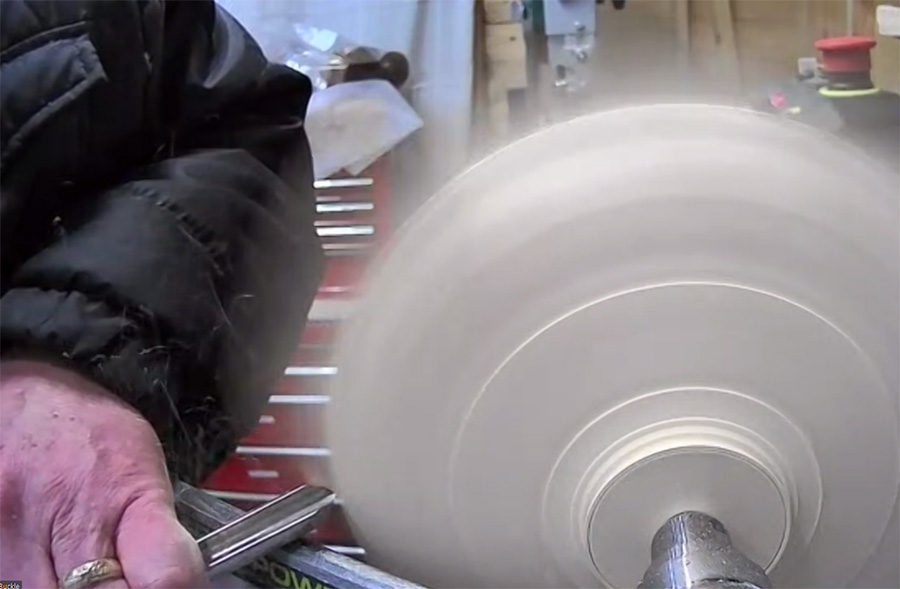 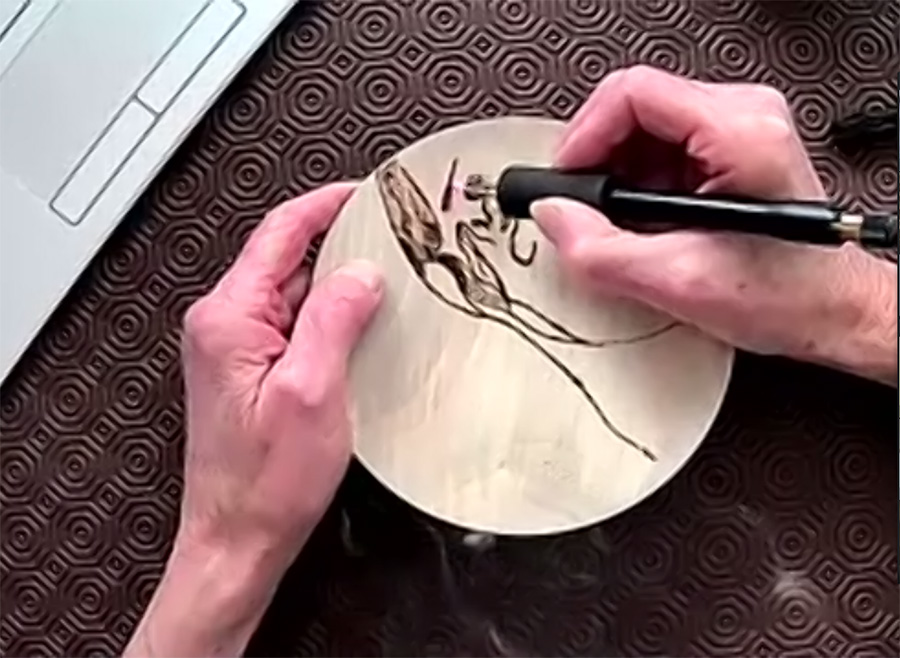 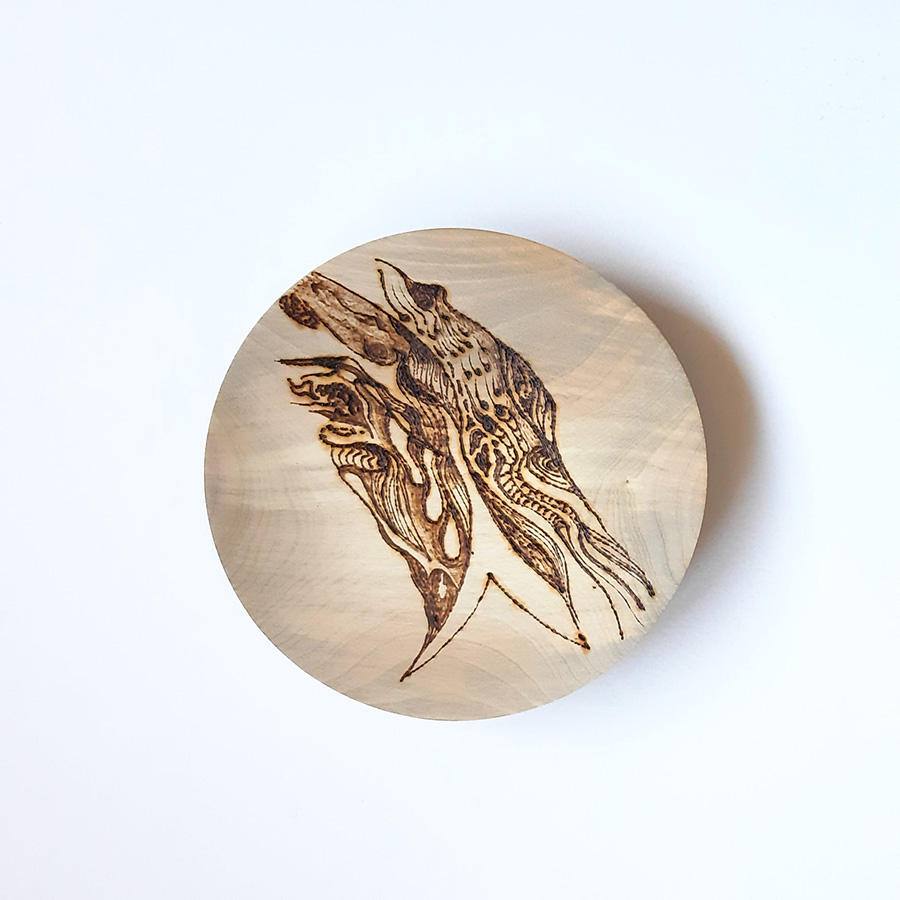 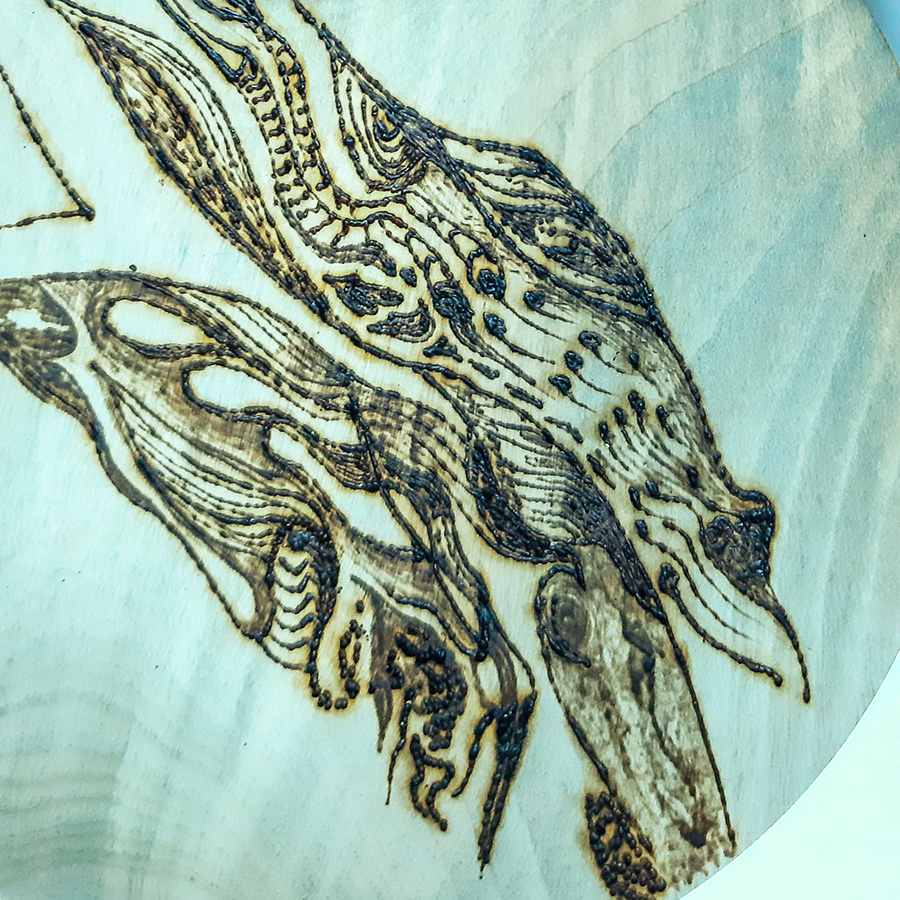 Something to Smile About

As you are hopefully aware, the Club is now a Registered Charity with the Charity Commission.  This gives us the benefit to obtain support in various ways, such as Gift Aid from the HMRC and certain companies offer cash back on purchases made, by people like you.  We have just registered with Amazon Smile and if your house is like mine, I don’t think a week goes by without a very distinctive Amazon box being delivered at our door.

We can get money from people who use Amazon and want to give their Smile funds to us.  Below is the link for you to sign up.  It doesn’t cost you anything and the price you pay on the items you buy is not increased.  We then get 0.5% of whatever you spend.  Now that does not sound much, but every penny helps and it soon builds up.  So please go and have a look and support your Club in this way.  Thank you.

A new idea for our members to take part in is on Tuesday 16th March 7PM start.  This is an online digital night with interviews and videos from our members, friendly chat and advice if you need any.  Hopefully, you will find time to tune in and it will inspire others to get into their workshops with their phones, camcorders etc and show us how they work.  You don’t need all the software you have heard us talking about, OBS, Touch Portal etc.  Sharing experiences has been a great help to many during the lockdown with lots more showing pieces created.  It’s also a free night, you just need to be a paid up member whether that is on the Annual/Quarterly payment scheme or the Pay As You Go option.  Please support this night, we are doing this for you, our Members. 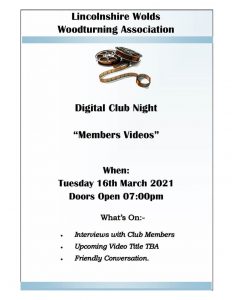 Don’t forget we have a new Turner to our screens on the 23rd Feb 2021, Martin Saban-Smith, so see you all there.  PAYG Members need to be purchasing their ticket as soon as possible if you want to watch this demo.  Any problems with doing this contact us.

Sorry, the Club Shop is still closed due to Lock down.  We let you know when we can open up again.  If you are desperate for something, contact Mick Close who might be able to help you. 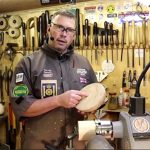 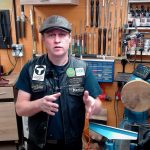