A good turnout of members on Tuesday 29th saw our latest IRD with Stewart Furini who welcomed us to his workshop and described that as his passion is for colouring plain turned items he would go through a series of colouring techniques that he practises.

It was interesting to see that as he mounted a blank of sycamore 10 by 2 inches that he uses the surface to try out new designs before arriving at a final piece; all the time utilising the surface, and he if it doesn’t like it turns or sands it off.

Several useful tips dotted his demo, only sand to 240 grit if using spirit stain, water-based stain reacts differently and takes longer to dry. Stewart added several colours firstly and employed his now famous masking tape method to give depth to the design; using a set of airbrushes to apply the stain over many masks, some shop bought and others homemade.

With a second blank mounted, pre turned and ebonised we saw some centrifugal paint ideas with acrylic and iridescent paints, Stewart had constructed a useful box to protect the lathe bed from paint spatter.

Following a ten minute comfort break, texture was added to yet another blank with a Proxon texturing tool, the “red hot etched rim bowl” as he described it, using black to highlight the etched area followed by some fiery colour, red orange and yellow to achieve the effect. Realising that not all off us might have the luxury of electronic tools, Stewart went on to apply various water based stains using screwed up newspaper in shades of blue with a little black and white: and finally if all those were not enough, he then got out a sack with past efforts with all sorts of different ideas he had and explained how they were created.

A short question and answer chat followed about how Stewart got into turning and colour and how he still works full time as a teacher in a large school. Many thanks to Stewart for an evening packed with ideas for the budding colourist, enjoyed by us all. 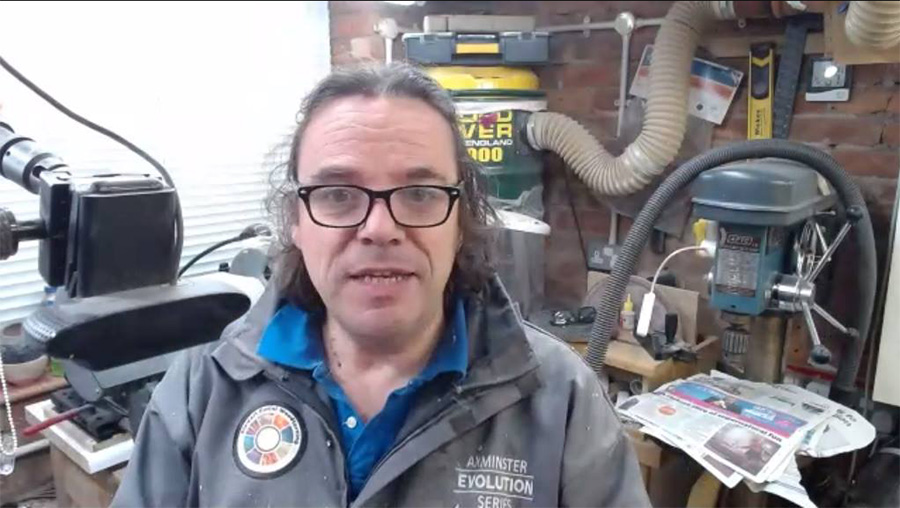 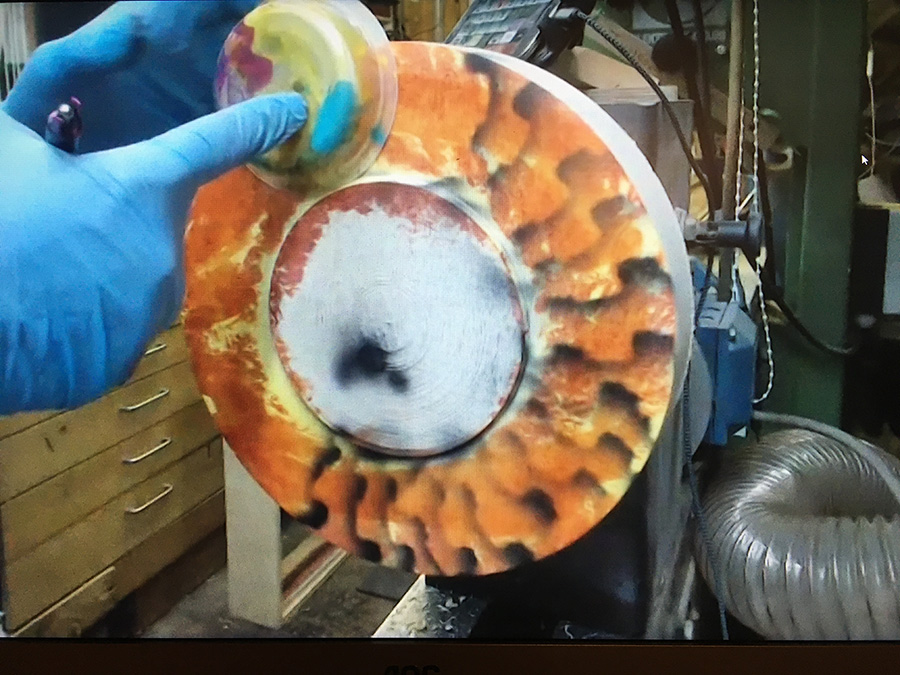 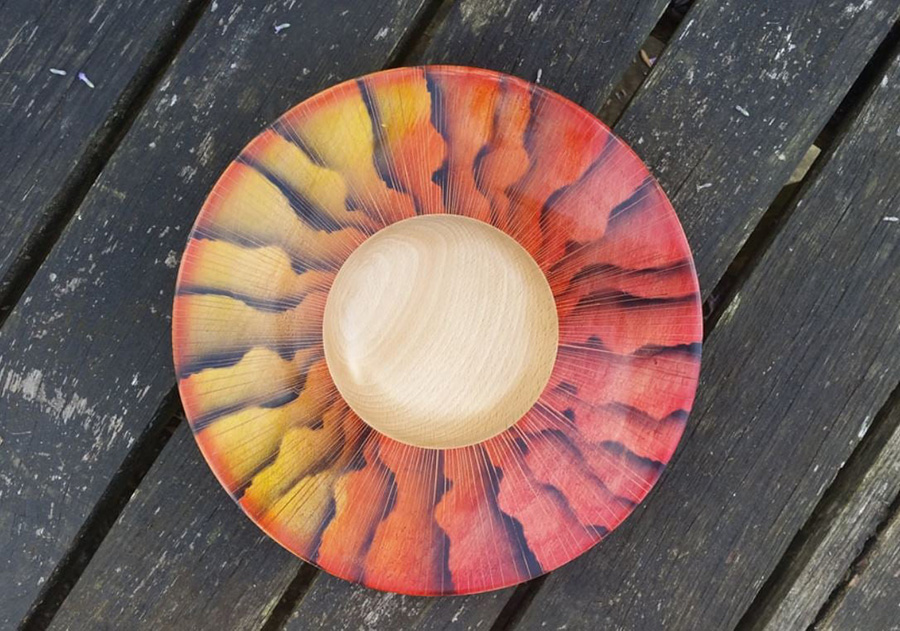 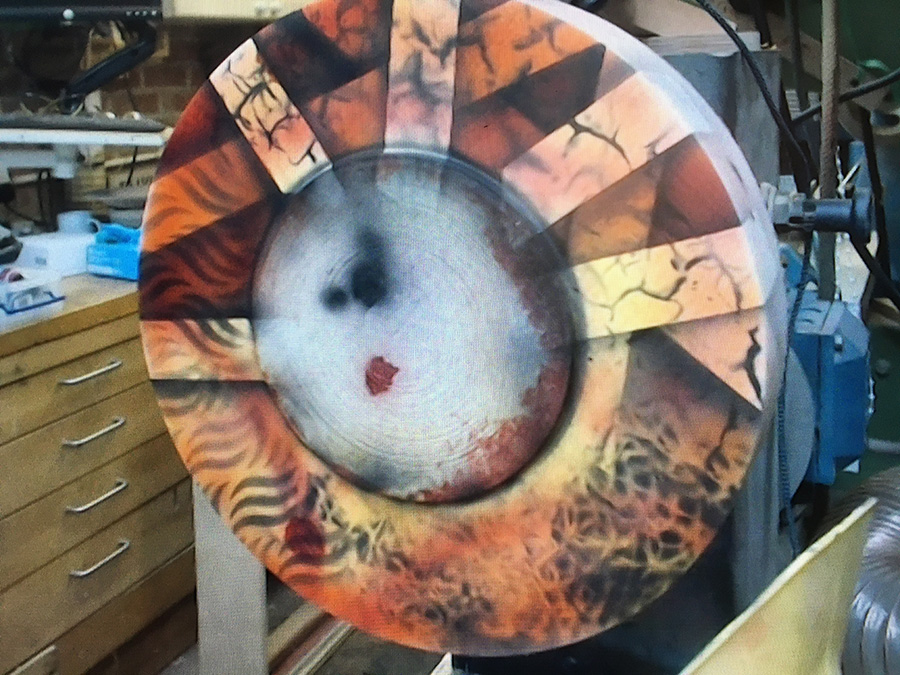 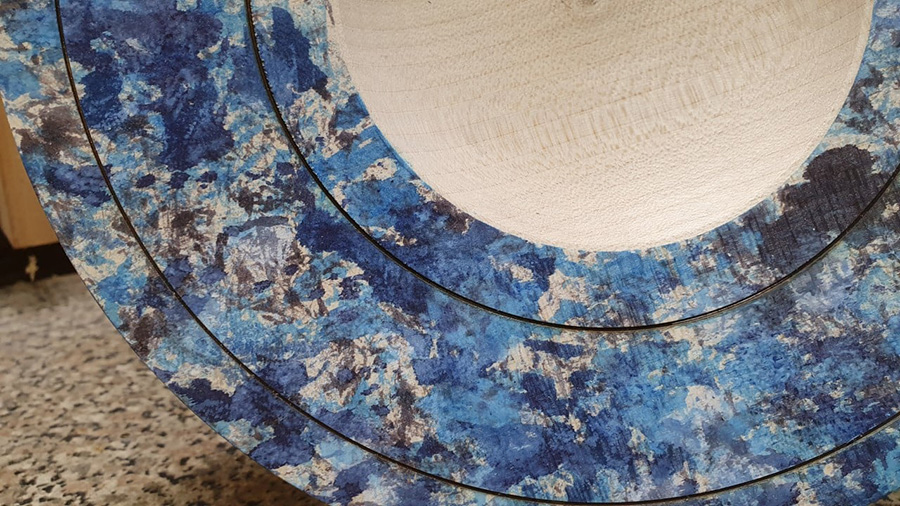 The Club have now set up a new private members only Facebook group.  There you can share your woodturning experiences, post photos, videos and generally chat, and message fellow Club members on what you have been making, what went wrong, get advice from others.  Our aim is to try and bring our membership back together again during these difficult times.  As the website is open to non members, anyone can view it.  By having the private Facebook Group, we can use it to share with our paid members various things.  Head on over to it by using the link below.

You need to be a paid up Club member to join it, so if you are reading this and have not renewed your membership in 2020, unfortunately your request will be declined.  So please pay your membership fee and come and join us.

Just to remind you all the Club Shop will be open between 10:00 and 12:00 hrs every fortnight from today until Christmas, why not come along meet some members, have a chat, and stock up on your woodturning needs, also a reminder that the shop has all the DVD’s from past club demonstrations available for rental.  Together with a  stock of globes and LED Lights to make your Christmas Decorations.

Martin Pidgen will be there selling his wood

PLEASE REMEMBER:  Face Masks to be worn and observe the social distancing of 2 metres to protect everyone.

Our next Workshop Activity Night is on the 13 Oct 2020 and we expecting Craig Heffren from Record Power to discuss everything related to Bandsaws, so have your questions ready.

We will also be having some live woodturning going on during the evening.  These are being provided by Chris, Zak and Alan who have been very busy setting up their workshops with cameras to bring, for the first time a similar type of evening like the Hands on Night.  So please show your support by getting involved and directing them on what you would like to see them do like you did when we met in the Hall. 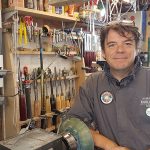 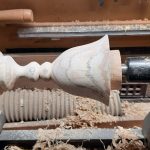