Sat 8th August 15 – Partney Fair.  This event has been running every year for the last 900+ years and the club were invited along to provide woodturning demonstrations.  This was the first such event, we as a club has taken part in.  After some serious planning on who was bringing the makings of the bacon butties, teas, coffees, biscuits and homemade cakes, a handful of members pitched up on a lovely sunny morning to set up our stall.  Once set up and then moved round again, we finally decided on the layout and got the kettle on.  The fair opened at 11am and ran until 4pm.  It was a busy little fair with lots of other interesting craft stalls and displays and events going on, such as the fun dog show, with the waggiest dog.

The event was well supported locally and there was a good turn out.  We never thought or expected to sell any of the items that Martin, Chris and Barry had brought along to sell, but we all went home happy having sold at least something each.  We did not make much, but having given out the club flyer to several people, there is always a chance we might get a few new members out of it.

All told, it was a great day, great company and we had a laugh doing it.  Roll on the next one!  Here are some photos of the event. 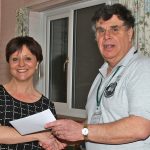 Cheque Presentation to our chosen Charities for 2015Charity 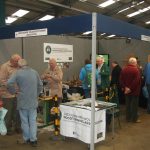